At the heart of the What So Proudly We Hail e-curriculum is this wonderfully rich anthology that uses story, speech, and song to help Americans realize more deeply—and appreciate more fully—who they are as citizens of the United States.

At once inspiring and thought-provoking, What So Proudly We Hail features dozens of selections on American identity, character, and civic life by our country’s greatest writers and leaders—from Mark Twain to John Updike, from George Washington to Theodore Roosevelt, from Willa Cather to Flannery O’Connor, from Benjamin Franklin to Martin Luther King Jr., from Francis Scott Key to Irving Berlin.

Developing robust American citizens involves educating the heart as well as the mind. It is not enough to understand our nation’s lofty principles or know our history; thoughtful and engaged citizens require cultivated moral imaginations and fitting sentiments and attitudes—matters both displayed in and nurtured by our great works of imaginative literature and rhetoric.

Featuring the editors’ insightful and instructive commentary, What So Proudly We Hail illuminates our national identity, the American creed, the American character, and the virtues and aspirations of active citizenship. This marvelous book will not only be a fixture on bedside tables; it will also spark conversations in homes, schools, colleges, and reading groups everywhere. 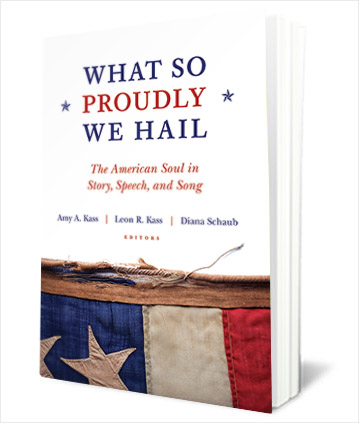 Amy A. Kass (1940–2015) was a senior fellow at the Hudson Institute, Senior Lecturer Emerita in the humanities at the University of Chicago, and coeditor of What So Proudly We Hail: The American Soul in Story, Speech, and Song (Intercollegiate Studies Institute, 2011). For nearly forty years, she was an award-winning teacher of classic texts. Ms. Kass was the founding director of the nationwide Tocqueville Seminars on Civic Leadership, and, more recently, the nationwide Dialogues on Civic Philanthropy. She served on the National Council on the Humanities for the National Endowment for the Humanities and as a consultant to the Corporation for Public Broadcasting and the Corporation for National and Community Service. Ms. Kass was an adviser to Civic Enterprises and the National Conference on Citizenship and a member of the board of the Ethics and Public Policy Center. She authored numerous articles and edited four other anthologies: American Lives: Cultural Differences, Individual Distinction (Golden Owl, 1995), Wing to Wing, Oar to Oar: Readings on Courting and Marrying (University of Notre Dame Press, 2000, with Leon Kass), The Perfect Gift: The Philanthropic Imagination in Poetry and Prose (Indiana University Press, 2002), and Giving Well, Doing Good: Readings for Thoughtful Philanthropists (Indiana University Press, 2007).

Leon R. Kass, M.D., is the Madden-Jewett Scholar at AEI, Harding Professor Emeritus in the Committee on Social Thought at the University of Chicago, and coeditor of What So Proudly We Hail: The American Soul in Story, Speech, and Song (Intercollegiate Studies Institute, 2011). Originally trained in medicine and biochemistry, he shifted directions from doing science to thinking about its human meaning, and he has been engaged for forty years with ethical and philosophical issues raised by biomedical advancements, and, more recently, with broader moral and cultural issues. Dr. Kass taught at St. John's College (Annapolis) and Georgetown University before returning in 1976 to the University of Chicago, where he was until 2010 an award-winning teacher deeply involved in undergraduate education and committed to the study of classic texts. With his wife, Amy A. Kass, he helped found a still-popular core humanities course on Human Being and Citizen and a degree-granting major, Fundamentals: Issues and Texts, emphasizing big questions and great books. His books include The Hungry Soul: Eating and the Perfecting of Our Nature (University of Chicago Press, 1999), Wing to Wing, Oar to Oar: Readings on Courting and Marrying (University of Notre Dame Press, 2000, with Ms. Kass), Life, Liberty, and the Defense of Dignity: The Challenge for Bioethics (Encounter Books, 2002), and The Beginning of Wisdom: Reading Genesis (Free Press, 2003). Dr. Kass served on the National Council on the Humanities of the National Endowment for the Humanities and delivered its Jefferson Lecture in 2009. From 2001 to 2005, he was chairman of the President's Council on Bioethics.

Diana Schaub, professor of political science at Loyola University Maryland, is coeditor of What So Proudly We Hail: The American Soul in Story, Speech, and Song (Intercollegiate Studies Institute, 2011). A member of the Hoover Institution’s Task Force on the Virtues of a Free Society, she is the 2011–12 Garwood Teaching Fellow at Princeton University, where she will teach a course on American statesmanship in the fall. She is the author of Erotic Liberalism: Women and Revolution in Montesquieu’s “Persian Letters” (Rowman & Littlefield, 1995) and a number of book chapters and articles on political philosophy and the thought of the Founders and Abraham Lincoln, as well as literary and political essays appearing in the Claremont Review of Books, the New Criterion, the Public Interest, Commentary, First Things, the American Interest, and City Journal, among others. Ms. Schaub is a contributing editor to the New Atlantis and a member of the publication committee of National Affairs. In 2001, she received the Richard M. Weaver Prize for Scholarly Letters.

“Guides teachers and students through our complex and remarkable history with speeches, stories, and songs that illustrate the ideas and spirit that shaped our republic. ”

“Great and seductive. Everyone should take time to read and discuss the selections. They bring fundamental ideas and values to life and foster reflection on what it means to be an American. ”

“A great site with lesson plans, teaching suggestions and resources . . . It gives you a sense of the kinds of things you can do through the use of fiction and non-fiction content. ”

“A wonderful resource for teachers and students. Its literary texts enrich the study of history; the study-guide questions foster close reading and engage the interests and passions of students; and the videos offer models of learning through civil and searching conversation. ”

“An inspiring book . . . An anthology of works that help frame an American identity . . . I would commend this kind of humanities compendium. ”

“Take a look at What So Proudly We Hail . . . [It] speaks to the tension and complexity of American identity. ”

— Eric Liu, founder of Sworn Again America
Back to Top