Who wouldn’t want it to be Christmas every day of the year? In this comic 1892 story by editor and critic William Dean Howells (1837–1920), a little girl gets her wish—with disastrous results. What is “pig[gish]” or “greedy” about wanting Christmas every day? How does its constant celebration spoil the holiday? Why is its celebration on other holidays (the Fourth of July, Thanksgiving) especially “awful”? Why do we have holidays? How should they be properly celebrated?


The little girl came into her papa’s study, as she always did Saturday morning before breakfast, and asked for a story. He tried to beg off that morning, for he was very busy, but she would not let him. So he began:

“Well, once there was a little pig—”

She stopped him at the word. She said she had heard little pig-stories till she was perfectly sick of them.

“Well, what kind of story shall I tell, then?”

“About Christmas. It’s getting to be the season.”

“Well!” Her papa roused himself. “Then I’ll tell you about the little girl that wanted it Christmas every day in the year. How would you like that?”

“First-rate!” said the little girl; and she nestled into comfortable shape in his lap, ready for listening.

“Very well, then, this little pig—Oh, what are you pounding me for?”

“Because you said little pig instead of little girl.”

“I should like to know what’s the difference between a little pig and a little girl that wanted it Christmas every day!”

“Papa!” said the little girl warningly. At this her papa began to tell the story.

Once there was a little girl who liked Christmas so much that she wanted it to be Christmas every day in the year, and as soon as Thanksgiving was over she began to send postcards to the old Christmas Fairy to ask if she mightn’t have it. But the old Fairy never answered, and after a while the little girl found out that the Fairy wouldn’t notice anything but real letters sealed outside with a monogram—or your initial, anyway. So, then, she began to send letters, and just the day before Christmas, she got a letter from the Fairy, saying she might have it Christmas every day for a year, and then they would see about having it longer.

The little girl was excited already, preparing for the old-fashioned, once-a-year Christmas that was coming the next day. So she resolved to keep the Fairy’s promise to herself and surprise everybody with it as it kept coming true, but then it slipped out of her mind altogether.

She had a splendid Christmas. She went to bed early, so as to let Santa Claus fill the stockings, and in the morning she was up the first of anybody and found hers all lumpy with packages of candy, and oranges and grapes, and rubber balls, and all kinds of small presents. Then she waited until the rest of the family was up, and she burst into the library to look at the large presents laid out on the library table—books, and boxes of stationery, and dolls, and little stoves, and dozens of handkerchiefs, and inkstands, and skates, and photograph frames, and boxes of watercolors, and dolls’ houses—and the big Christmas tree, lighted and standing in the middle.

She had a splendid Christmas all day. She ate so much candy that she did not want any breakfast, and the whole forenoon the presents kept pouring in that had not been delivered the night before, and she went round giving the presents she had got for other people, and came home and ate turkey and cranberry for dinner, and plum pudding and nuts and raisins and oranges, and then went out and coasted, and came in with a stomachache, crying, and her papa said he would see if his house was turned into that sort of fool’s paradise another year, and they had a light supper, and pretty early everybody went to bed cross.

“Nonsense! It was Christmas yesterday,” said the little girl, rubbing her eyes sleepily.

Her brothers and sisters just laughed. “We don’t know about that. It’s Christmas today, anyway. You come into the library and see.”

Then all at once it flashed on the little girl that the Fairy was keeping her promise, and her year of Christmases was beginning. She was dreadfully sleepy, but she sprang up and darted into the library. There it was again! Books, and boxes of stationery, and dolls, and so on.

There was the Christmas tree blazing away, and the family picking out their presents, and her father looking perfectly puzzled, and her mother ready to cry. “I’m sure I don’t see how I’m to dispose of all these things,” said her mother, and her father said it seemed to him they had had something just like it the day before, but he supposed he must have dreamed it. This struck the little girl as the best kind of a joke, and so she ate so much candy she didn’t want any breakfast, and went round carrying presents, and had turkey and cranberry for dinner, and then went out and coasted, and came in with a stomachache, crying.

Now, the next day, it was the same thing over again, but everybody getting crosser, and at the end of a week’s time so many people had lost their tempers that you could pick up lost tempers anywhere, they perfectly strewed the ground. Even when people tried to recover their tempers they usually got somebody else’s, and it made the most dreadful mix.

The little girl began to get frightened, keeping the secret all to herself, she wanted to tell her mother, but she didn’t dare to, and she was ashamed to ask the Fairy to take back her gift, it seemed ungrateful and ill-bred. So it went on and on, and it was Christmas on St. Valentine’s Day and Washington’s Birthday, just the same as any day, and it didn’t skip even the First of April, though everything was counterfeit that day, and that was some little relief.

After a while turkeys got to be awfully scarce, selling for about a thousand dollars apiece. They got to passing off almost anything for turkeys—even half-grown hummingbirds. And cranberries—well they asked a diamond apiece for cranberries. All the woods and orchards were cut down for Christmas trees. After a while they had to make Christmas trees out of rags. But there were plenty of rags, because people got so poor, buying presents for one another, that they couldn’t get any new clothes, and they just wore their old ones to tatters. They got so poor that everybody had to go to the poorhouse, except the confectioners, and the storekeepers, and the book-sellers, and they all got so rich and proud that they would hardly wait upon a person when he came to buy. It was perfectly shameful!

After it had gone on about three or four months, the little girl, whenever she came into the room in the morning and saw those great ugly, lumpy stockings dangling at the fireplace, and the disgusting presents around everywhere, used to sit down and burst out crying. In six months she was perfectly exhausted, she couldn’t even cry anymore.

And how it was on the Fourth of July! On the Fourth of July, the first boy in the United States woke up and found out that his firecrackers and toy pistol and two-dollar collection of fireworks were nothing but sugar and candy painted up to look like fireworks. Before ten o’clock every boy in the United States discovered that his July Fourth things had turned into Christmas things and was so mad. The Fourth of July orations all turned into Christmas carols, and when anybody tried to read the Declaration of Independence, instead of saying, “When in the course of human events it becomes necessary,” he was sure to sing, “God rest you merry gentlemen.” It was perfectly awful.

About the beginning of October the little girl took to sitting down on dolls wherever she found them—she hated the sight of them so, and by Thanksgiving she just slammed her presents across the room. By that time people didn’t carry presents around nicely anymore. They flung them over the fence or through the window, and, instead of taking great pains to write “For dear Papa,” or “Mama,” or “Brother,” or “Sister,” they used to write, “Take it, you horrid old thing!” and then go and bang it against the front door.

Nearly everybody had built barns to hold their presents, but pretty soon the barns overflowed, and then they used to let them lie out in the rain, or anywhere. Sometimes the police used to come and tell them to shovel their presents off the sidewalk or they would arrest them.

Before Thanksgiving came it had leaked out who had caused all these Christmases. The little girl had suffered so much that she had talked about it in her sleep, and after that hardly anybody would play with her, because if it had not been for her greediness it wouldn’t have happened. And now, when it came Thanksgiving, and she wanted them to go to church, and have turkey, and show their gratitude, they said that all the turkeys had been eaten for her old Christmas dinners and if she would stop the Christmases, they would see about the gratitude. And the very next day the little girl began sending letters to the Christmas Fairy, and then telegrams, to stop it. But it didn’t do any good, and then she got to calling at the Fairy’s house, but the girl that came to the door always said, “Not at home,” or “Engaged,” or something like that, and so it went on till it came to the old once-a-year Christmas Eve. The little girl fell asleep, and when she woke up in the morning—

“She found it was all nothing but a dream,” suggested the little girl.

“Why, that it wasn’t Christmas at last, and wasn’t ever going to be, anymore. Now it’s time for breakfast.”

The little girl held her papa fast around the neck.

“You shan’t go if you’re going to leave it so!”

“Christmas once a year.”

“All right,” said her papa, and he went on again.

Well, with no Christmas ever again, there was the greatest rejoicing all over the country. People met together everywhere and kissed and cried for joy. Carts went around and gathered up all the candy and raisins and nuts, and dumped them into the river, and it made the fish perfectly sick. And the whole United States, as far out as Alaska, was one blaze of bonfires, where the children were burning up their presents of all kinds. They had the greatest time!

“How will that do?” asked the papa.

“First-rate!” said the little girl, but she hated to have the story stop, and was rather sober. However, her mama put her head in at the door and asked her papa:

“Are you never coming to breakfast? What have you been telling that child?”

The little girl caught him around the neck again.

Return to The Meaning of Christmas Day. 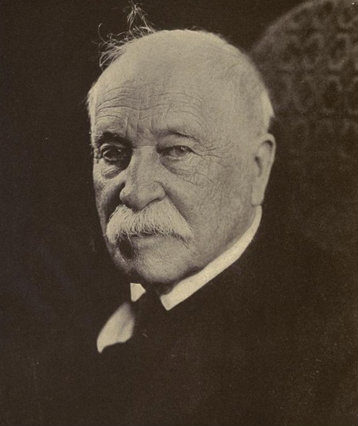