The Revolutionary War was not only a war between Great Britain and America. As this selection reminds us, it was also very much a civil war, fought between revolutionary and loyalist (Tory) militias. On October 7, 1780, these militias faced off at the Battle of Kings Mountain, in rural York County, South Carolina. The result was a decisive victory for the Continentals (also known as “Patriots”). In this account from his Autobiography of a Revolutionary Soldier, James P. Collins (1763–1843) describes what the battle was like for the patriot militiamen.

The enemy was posted on a high, steep and rugged ridge, or spur of the mountain, very difficult of access. . . . The plan was, to surround the mountain and attack them on all sides, if possible. In order to do this, the left had to march under the fire of the enemy to gain the position assigned to them, on the stream on the right of the enemy, while the right was to take possession of the other stream; in doing this they were not exposed, the cliff being so steep as to cover them completely. Each leader made a short speech in his own way to his men, desiring every coward to be off immediately; here I confess I would willingly have been excused, for my feelings were not the most pleasant.—this may be attributed to my youth, not being quite seventeen years of age—but I could not well swallow the appellation of coward. I looked around; every man’s countenance seemed to change; well, thought I, fate is fate, every man’s fate is before him and he has to run it out. . . .

We were soon in motion, every man throwing four or five balls in his mouth to prevent thirst, also to be in readiness to reload quick. The shot of the enemy soon began to pass over us like hail; the first shock was quickly over, and for my own part, I was soon in profuse sweat. My lot happened to be in the center, where the severest part of the battle was fought. We soon attempted to climb the hill, but were fiercely charged upon and forced to fall back to our first position; we tried a second time, but met the same fate; the fight then seemed to become more furious. Their leader, Ferguson, came in full view, within rifle shot as if to encourage his men, who by this time were falling very fast: he soon disappeared. We took to the hill a third time; the enemy gave way; when we had gotten near the top, some of our leaders roared out, “Hurrah, my brave fellows! Advance! They are crying for quarter.”

By this time, the right and left had gained the top of the cliff; the enemy was completely hemmed in on all sides, and no chance of escaping—besides, their leader had fallen. They soon threw down their arms and surrendered. After the fight was over, the situation of the poor Tories appeared to be really pitiable; the dead lay in heaps on all sides, while the groans of the wounded were heard in every direction. I could not help turning away from the scene before me with horror and, though exulting in victory, could not refrain from shedding tears. . . .

On examining the dead body of their great chief, it appeared that almost fifty rifles must have been leveled at him, at the same time; seven rifle balls had passed through his body, both of his arms were broken, and his hat and clothing were literally shot to pieces. Their great elevation above us had proved their ruin; they overshot us altogether, scarce touching a man, except those on horseback, while every rifle from below seemed to have the desired effect. . . .

Next morning, which was Sunday, the scene became really distressing: the wives and children of the poor Tories came in, in great numbers. Their husbands, fathers, and brothers, lay dead in heaps, while others lay wounded or dying; a melancholy sight indeed! While numbers of the survivors were doomed to abide the sentence of a court martial, and several were actually hanged. . . .

We proceeded to bury the dead, but it was badly done; they were thrown into convenient piles, and covered with old logs, the bark of old trees, and rocks; yet not so as to secure them from becoming a prey to the beasts of the forest or the vultures of the air; and the wolves became so plenty that it was dangerous for any one to be out at night, for several miles around; also, the hogs in the neighborhood gathered in to the place to devour the flesh of men, inasmuch as numbers chose to live on little meat rather than eat their hogs, though they were very fat; half of the dogs in the country were said to be mad, and were put to death. I saw, myself, in passing the place, a few weeks after, all parts of the human frame, lying scattered in every direction . . . 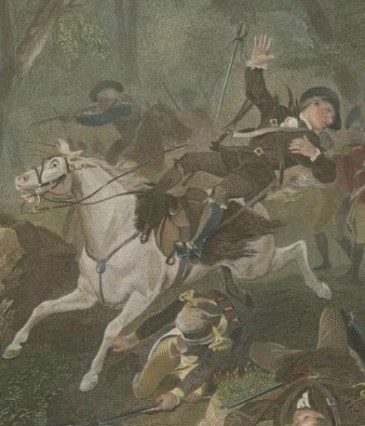