A New York City native born to working-class Jewish parents, William Gropper (1897–1977) studied at the avant-garde Ferrer Modern School in New York under George Bellows and Robert Henri, whose works emphasized realism and sought to depict the modern, urban experience. From there, Gropper won a scholarship to attend the New York School of Fine and Applied Arts, now the Parsons School of Design, and began working as a cartoonist for Yiddish and left-wing political newspapers, such as The New Masses, The Worker, and The Morning Freiheit.

As Gropper rose in prominence, he became known for satirizing modern American capitalism as well as lionizing the working class and those who labored, emphasizing teamwork, bravery, and strength. In the 1930s, he won several commissions for large, public murals, and with funding from the Works Project Administration (WPA) completed murals at post offices across the country and at the US Department of the Interior in Washington, DC. In the early 1950s, however, Senator Joseph McCarthy accused Gropper’s works of promoting communist ideals. Subpoenaed to testify before the House Un-American Activities Committee in May 1953, Gropper refused to answer any questions and was subsequently blacklisted. By the end of his life in 1977, though, shifts in artistic and cultural tastes rediscovered Gropper as an important artist.

This image is a study for a mural titled Automobile Industry, commissioned for the Detroit, Michigan Post Office (1940–41) as part of Gropper’s work with the WPA. It incorporates bold colors, flattened figures, and dynamic action, contributing to a great sense of energy in the work and reflecting the influence and style of Gropper’s training as a cartoonist. The autoworkers are portrayed as heroic figures, while Gropper emphasizes the ethos of cooperation among the team members. 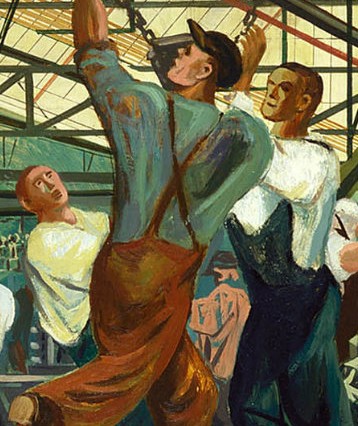