Columbus and His Discovery of America

By Herbert B. Adams

In this address, given on October 10, 1892 at the Peabody Institute at Johns Hopkins University to celebrate the opening of the academic year, Herbert Baxter Adams (1850–1901), a professor of history, uses Columbus’s discovery of the New World as an example of a “great deed,” that brings with it “a certain immortality.” What precisely, according to the poem, are the excellences of Columbus? What is the meaning of “Those faithful, finding eyes”? Why does Adams think—and why might anyone think—that the discovery of America is the greatest event in secular history? What other events, before or since, would you think comparable? According to what standards of greatness?

“Was this his face, and these the finding eyes
That plucked a new world from the rolling seas?
Who, serving Christ, whom most he sought to please,
Willed his one thought until he saw arise
Man’s other home and earthly paradise—
His early vision, when with stalwart knees
He pushed the boat from his young olive-trees,
And sailed to wrest the secret of the skies?

“He on the waters dared to set his feet,
And through believing planted earth’s last race.
What faith in man must in our new world beat,
Thinking how once he saw before his face
The West and all the host of stars retreat
Into the silent infinite of space!”1

Those faithful, finding eyes of Columbus! For now four hundred years they have looked outward upon the westward course of empire in the new hemisphere which he first opened to discovery and conquest. Our modern eyes seek in vain to arrest that steadfast, far-away gaze, which seems to be looking into a future beyond our own. In the radiant light of the four hundredth anniversary of the discovery of America, millions of men and women will look upon this man’s face with curious or admiring eyes; but when this generation, and many hundred years shall have passed away, those “finding eyes” will still be shining on through art, and poetry and history, like stars in the firmament.

There is a certain immortality in a great deed, like that of Columbus, which makes the doer, even though in many respects an ordinary man of his time, forever memorable. The discovery of America has been called the greatest event in secular history. This dictum may shock the ancients and startle the moderns; but let the mind of reflecting students range at will, through the centuries, back and forth in the galleries of human achievement, and determine if you can what single secular deed even approximates in grandeur and far-reaching historic significance to the finding of a new world on this earth, with which planet alone history is concerned. What are all the conquests of antiquity, or the decisive battles and great inventions of mankind, compared with America, time’s noblest offspring? The passage of Christopher Columbus across the western sea, bearing the weight of Christendom and European civilization, opened the way for the greatest migrations in human history, for the steady march of enlightened nations towards civil and religious liberty. The discovery of America was the first crossing of Oceanus, that great and murmuring stream, which flowed around the old Mediterranean world. Amid the groaning and travailing of human creation, men burst the confines of that outward sea and began to people new continents. I tell you, sirs, the modern history of Europe, with its long exodus of hungry, landless peoples, with its epoch-making wars, its revolutions in church and state, were conditioned by that one secular event called the discovery of America.

1 George Edward Woodberry, “On a Portrait of Columbus,” 1892. Return to text. 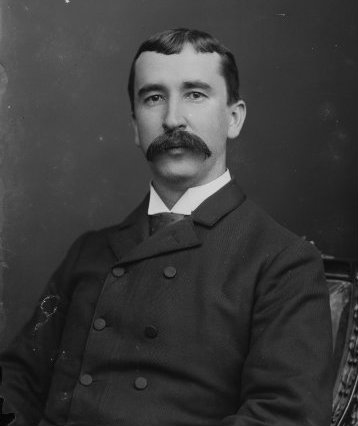