Excerpt from The Columbiad

In 1807 the American poet, diplomat, businessman, and politician Joel Barlow (1754–1812) published an epic poem about Columbus, a more elaborate version of his earlier work The Vision of Columbus (1787). After reading this first poem, George Washington wrote to the Marquis de Lafayette about Barlow, declaring that the poet was “considered by those who are good Judges to be a genius of the first magnitude; and to be one of those Bards who hold the keys of the gate by which Patriots, Sages and Heroes are admitted to immortality.”

Unlike Timothy Dwight’s poem, Barlow’s clearly invokes and glorifies Columbus, the man, and suggests that his life’s experience would have made him sympathetic to the American Revolution and its novel political principles. What was it about Columbus’ life and experience that, according to Barlow, made Columbus a forerunner and prophet of the future United States? What does Barlow see in the American prospect that justifies his linking it with Columbus?

I sing the Mariner who first unfurl’d
An eastern banner o’er the western world,
And taught mankind where future empires lay
In these fair confines of descending day;
Who sway’d a moment, with vicarious power,
Iberia’s sceptre on the new found shore,
Then saw the paths his virtuous steps had trod
Pursued by avarice and defiled with blood,
The tribes he foster’d with paternal toil
Snatch’d from his hand, and slaughter’d for their spoil.

Slaves, kings, adventurers, envious of his name,
Enjoy’d his labours and purloin’d his fame,
And gave the Viceroy, from his high seat hurl’d.
Chains for a crown, a prison for a world
Long overwhelm’d in woes, and sickening there,
He met the slow still march of black despair,
Sought the last refuge from his hopeless doom,
And wish’d from thankless men a peaceful tomb:
Till vision’d ages, opening on his eyes,
Cheer’d his sad soul, and bade new nations rise;
He saw the Atlantic heaven with light o’ercast,
And Freedom crown his glorious work at last.

Almighty Freedom! give my venturous song
The force, the charm that to thy voice belong;
Tis thine to shape my course, to light my way,
To nerve my country with the patriot lay,
To teach all men where all their interest lies,
How rulers may be just and nations wise:
Strong in thy strength I bend no suppliant knee,
Invoke no miracle, no Muse but thee.

. . . Based on its rock of Right your empire lies,
On walls of wisdom let the fabric rise;
Preserve your principles, their force unfold,
Let nations prove them and let kings behold.
EQUALITY, your first firm-grounded stand;
Then FREE ELECTION; then your FEDERAL BAND;
This holy Triad should forever shine
The great compendium of all rights divine,
Creed of all schools, whence youths by millions draw
Their themes of right, their decalogues of law;
Till men shall wonder (in these codes inured)
How wars were made, how tyrants were endured.

Then shall your works of art superior rise,
Your fruits perfume a larger length of skies,
Canals careering climb your sunbright hills,
Vein the green slopes and strow their nurturing rills,1
Thro tunnel’d heights and sundering ridges glide,
Rob the rich west of half Kenhawa’s tide,2
Mix your wide climates, all their stores confound,
And plant new ports in every midland mound.
Your lawless Mississippi, now who slimes
And drowns and desolates his waste of climes,
Ribb’d with your dikes, his torrent shall restrain,
And ask your leave to travel to the main;
Won from his wave while rising cantons smile,
Rear their glad nations and reward their toil.

2 A tributary of the Ohio River in West Virginia. Return to text. 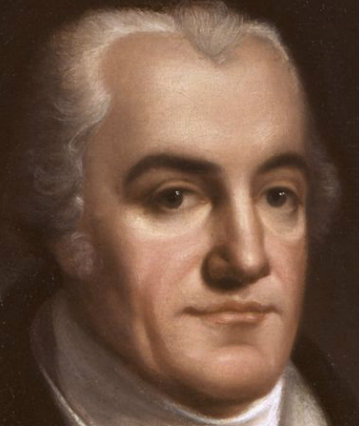