It would be difficult, not to say impossible, to understand the Civil Rights Movement without appreciating the importance of its music. Freedom Songs, as they came to be known, accompanied marches and sit-ins, rallies and boycotts, providing encouragement against fear, and communal feeling against isolation. Equally important, the words of the songs articulated the aspirations and goals of the Movement, in terms that united deep religious longings and secular American strivings. By giving voice to these aspirations in song, the music fused hearts and minds in strong and common purpose, inspiring singers and listeners alike, both black and white, with high hopes for a better tomorrow.

Many of the Freedom Songs originated as gospel hymns or Negro spirituals, and religious themes of faith and hope, suffering and redemption figure prominently in the lyrics. Local churches became centers for meetings of the Movement, at which discussions of strategy were interspersed with group singing and prayer. To be sure, the hymns and gospel songs were sometimes jazzed up and often secularized and altered, for example, to identify specific places or targets of protest. But the continuing religious resonances of the music guaranteed that the Movement, no matter how political its goals, would always retain its spiritual flavor and mood.

The Reverend Dr. Martin Luther King Jr. himself frequently emphasized the importance of music in the Civil Rights Movement. Early, in his memoir about the 1955–56 Montgomery Bus Boycott, Stride Toward Freedom, he said that the songs “brought to mind the long history of the Negro’s suffering.” Later, during the 1961 Albany (Ga.) Movement, he said, “They give the people new courage and a sense of unity. I think they keep alive a faith, a radiant hope, in the future, particularly in our most trying hours.”  And in his 1964 book Why We Can’t Wait, he called the songs ‘‘the soul of the movement.’’ Civil rights activists, he wrote, “sing the freedom songs today for the same reason the slaves sang them, because we too are in bondage and the songs add hope to our determination that ‘We shall overcome, Black and White together, We shall overcome someday.’”

Dozens of songs were associated with the Civil Rights Movement, and their histories, as well as recordings of their performance, are widely available online. We present here only a few of the more prominent ones, mainly to illustrate their range, variety, and diverse articulations of goals and purposes. Study each song. Read each verse carefully and identify its special theme, claim, or message. Then consider the song as a whole—its content and its feeling—and try to figure out how its various themes—for example, freedom, justice, peace, and brotherhood—relate to each other. How would singing this song—especially in the company of many fellow singers—make you feel? Does it matter whether the ideas of the song are coherent or not?

“Lift Every Voice and Sing”
“Onward, Christian Soldiers”
“We Shall Overcome”
“This Little Light of Mine”
“Keep Your Eyes on the Prize”
“Oh, Freedom” 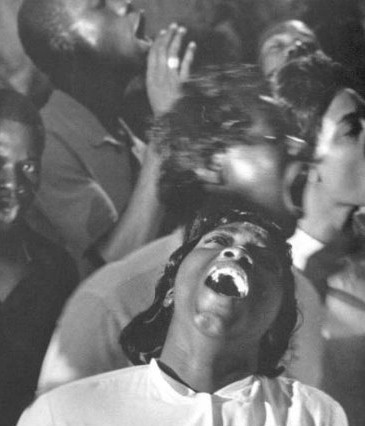