The most suitable mirror for taking the measure of a great man, it has been commonly observed, is a man of comparable greatness, good if a friend, sometimes even better if a rival or an enemy. Throughout their long association, culminating in his serving as Secretary of State in Washington’s first administration, Thomas Jefferson (1743–1826) was at various times Washington’s friend, rival, and, on important matters of policy, an opponent, if not quite an enemy. Writing to Virginia physician, scholar, and member of Congress, Dr. Walter Jones (1745–1815), 15 years after Washington’s death, Jefferson describes Washington’s character and assesses his stature, providing information to Jones who was apparently planning to write something about Washington.

What virtues does Jefferson ascribe to Washington? What shortcomings does he report? Why does he so often adopt formulations that qualify or balance his praise (for example, “His mind was great and powerful, without being of the very first order; his penetration strong, though, not so acute as that of a Newton, Bacon, or Locke;” or “In his expenses he was honorable, but exact.”)? Do you think Jefferson is being sincere or ironic when he sums up as follows: “His character was, in its mass, perfect . . . [N]ever did nature and fortune combine more perfectly to make a man great, and to place him in the same constellation with whatever worthies have merited from man an everlasting remembrance”? Do you detect ongoing signs of Jefferson’s rivalry with Washington (for example, in the comments about Washington’s intellect and reading habits), enough to say that the letter reveals more about Jefferson than about Washington? Or do you think that the evidence of rivalry make Jefferson’s praise all the more impressive?

You say that in taking General Washington on your shoulders, to bear him harmless through the federal coalition, you encounter a perilous topic. I do not think so. You have given the genuine history of the course of his mind through the trying scenes in which it was engaged, and of the seductions by which it was deceived, but not depraved. I think I knew General Washington intimately and thoroughly; and were I called on to delineate his character, it should be in terms like these.

His mind was great and powerful, without being of the very first order; his penetration strong, though not so acute as that of a Newton, Bacon, or Locke; and as far as he saw, no judgment was ever sounder. It was slow in operation, being little aided by invention or imagination, but sure in conclusion. Hence the common remark of his officers, of the advantage he derived from councils of war, where hearing all suggestions, he selected whatever was best; and certainly no General ever planned his battles more judiciously. But if deranged during the course of the action, if any member of his plan was dislocated by sudden circumstances, he was slow in a re-adjustment. The consequence was, that he often failed in the field, and rarely against an enemy in station, as at Boston and York. He was incapable of fear, meeting personal dangers with the calmest unconcern. Perhaps the strongest feature in his character was prudence, never acting until every circumstance, every consideration, was maturely weighed; refraining if he saw a doubt, but, when once decided, going through with his purpose, whatever obstacles opposed. His integrity was most pure, his justice the most inflexible I have ever known, no motives of interest or consanguinity, of friendship or hatred, being able to bias his decision. He was, indeed, in every sense of the words, a wise, a good, and a great man. His temper was naturally irritable and high-toned; but reflection and resolution had obtained a firm and habitual ascendancy over it. If ever, however, it broke its bonds, he was most tremendous in his wrath. In his expenses he was honorable, but exact; liberal in contributions to whatever promised utility; but frowning and unyielding on all visionary projects, and all unworthy calls on his charity. His heart was not warm in its affections; but he exactly calculated every man’s value, and gave him a solid esteem proportioned to it. His person, you know, was fine, his stature exactly what one would wish, his deportment easy, erect, and noble; the best horseman of his age, and the most graceful figure that could be seen on horseback. Although in the circle of his friends, where he might be unreserved with safety, he took a free share in conversation, his colloquial talents were not above mediocrity, possessing neither copiousness of ideas, nor fluency of words. In public, when called on for a sudden opinion, he was unready, short and embarrassed. Yet he wrote readily, rather diffusely, in an easy and correct style. This he had acquired by conversation with the world, for his education was merely reading, writing, and common arithmetic, to which he added surveying at a later day. His time was employed in action chiefly, reading little, and that only in agriculture and English history. His correspondence became necessarily extensive, and, with journalizing his agricultural proceedings, occupied most of his leisure hours within doors. On the whole, his character was, in its mass, perfect, in nothing bad, in few points indifferent; and it may truly be said, that never did nature and fortune combine more perfectly to make a man great, and to place him in the same constellation with whatever worthies have merited from man an everlasting remembrance. For his was the singular destiny and merit, of leading the armies of his country successfully through an arduous war, for the establishment of its independence; of conducting its councils through the birth of a government, new in its forms and principles, until it had settled down into a quiet and orderly train; and of scrupulously obeying the laws through the whole of his career, civil and military, of which the history of the world furnishes no other example.

How, then, can it be perilous for you to take such a man on your shoulders? I am satisfied the great body of republicans think of him as I do. We were, indeed, dissatisfied with him on his ratification of the British treaty. But this was short-lived. We knew his honesty, the wiles with which he was encompassed, and that age had already begun to relax the firmness of his purposes; and I am convinced he is more deeply seated in the love and gratitude of the republicans, than in the Pharisaical homage of the federal monarchists. For he was no monarchist from preference of his judgment. The soundness of that gave him correct views of the rights of man, and his severe justice devoted him to them. He has often declared to me that he considered our new constitution as an experiment on the practicability of republican government, and with what dose of liberty man could be trusted for his own good; that he was determined the experiment should have a fair trial, and would lose the last drop of his blood in support of it. And these declarations he repeated to me the oftener and the more pointedly, because he knew my suspicions of Colonel Hamilton’s views, and probably had heard from him the same declarations which I had, to wit, “that the British constitution, with its unequal representation, corruption, and other existing abuses, was the most perfect government which had ever been established on earth, and that a reformation of these abuses would make it an impracticable government.” I do believe that General Washington had not a firm confidence in the durability of our government. He was naturally distrustful of men, and inclined to gloomy apprehensions: and I was ever persuaded that a belief that we must at length end in something like a British constitution, had some weight in his adoption of the ceremonies of levees, birth-days, pompous meetings with Congress, and other forms of the same character, calculated to prepare us gradually for a change which he believed possible, and to let it come on with as little shock as might be to the public mind.

These are my opinions of General Washington, which I would vouch at the judgment-seat of God, having been formed on an acquaintance of thirty years. I served with him in the Virginia legislature from 1769 to the Revolutionary war, and again, a short time in Congress, until he left us to take command of the army. During the war and after it we corresponded occasionally, and in the four years of my continuance in the office of Secretary of State, our intercourse was daily, confidential and cordial. After I retired from that office, great and malignant pains were taken by our federal monarchists, and not entirely without effect, to make him view me as a theorist, holding French principles of government, which would lead infallibly to licentiousness and anarchy. And to this he listened the more easily, from my known disapprobation of the British treaty. I never saw him afterwards, or these malignant insinuations should have been dissipated before his just judgment, as mists before the sun. I felt on his death, with my countrymen, that “verily a great man hath fallen this day in Israel.” 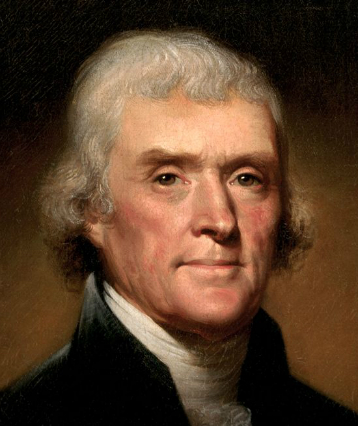