Born in Portsmouth, New Hampshire, Arthur Clifton Goodwin (1864–1929) was raised outside Boston, a city he later made his home. Though he did not make painting his career until age thirty, the self-taught artist eventually became one of Boston’s most celebrated painters—and one of the nation’s last great impressionist artists. Goodwin often used the cities of Boston and New York as the subjects of his paintings, setting up his easel on the sidewalk in order to capture the street-level experience of city life. Goodwin, who struggled with alcoholism throughout his life and suffered bouts of depression after his failed marriage, died at the age of sixty-five, shortly after arranging a trip to Paris to study impressionism with fellow American artist Louis Kronberg.

In this painting, Liberty Loan Parade (1918), created in a Boston studio across from the Public Garden, Goodwin depicts a fundraising parade coming down Arlington Street. Such parades were held in cities across the United States as a way to raise money for the US war effort during World War I. Goodwin himself sold this painting at an auction to raise money for war bonds.

Goodwin’s painting gives its viewers a panoramic, bird’s-eye view of parading soldiers, watched by citizen spectators, with the public garden and the city of Boston peacefully spread out behind. But against the autumnal colors, our gaze is drawn most to the American flag, itself on parade, stretched and carried by a troop of soldiers. How does this scene move you or impress you? What might it suggest about the relationship between the parading soldiers and flag, on the one hand, and the citizens and peaceful city, on the other? 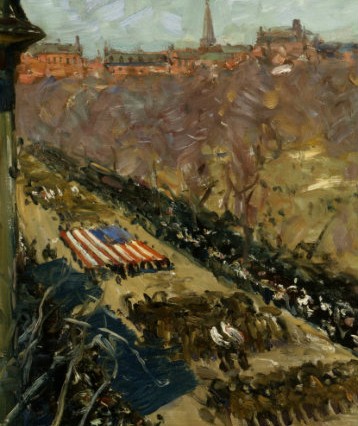