Archibald MacLeish (1892–1982), Pulitzer Prize–winning poet, lawyer, and (later) ninth Librarian of Congress (1939–44), wrote “Memorial Rain” (1926) after attending the dedication of the cemetery in Belgium where his younger brother Kenneth, killed in 1918 during World War I, was buried. Embittered by the war, especially because of the loss of his brother, MacLeish expresses his own discontent by contrasting what he heard from the politicians at the service and what he actually experienced.

Why do Ambassador Puser’s words—about the “country’s gratitude,” the “deep repose” and “peace” of the fallen men who “rest” there, and the “earth their bones have hallowed,” etc.—fall so flat? What does MacLeish hear instead? Why might what he hears instead bring his brother closer? Why does he call the rain—and the poem—“memorial rain”?

Ambassador Puser the ambassador
Reminds himself in French, felicitous tongue,
What these (young men no longer) lie here for
In rows that once, and somewhere else, were young . . .

All night in Brussels the wind had tugged at my door:
I had heard the wind at my door and the trees strung
Taut, and to me who had never been before
In that country it was a strange wind, blowing
Steadily, stiffening the walls, the floor,
The roof of my room. I had not slept for knowing
He too, dead, was a stranger in that land
And felt beneath the earth in the wind’s flowing
A tightening of roots and would not understand,
Remembering lake winds in Illinois,
That strange wind. I had felt his bones in the sand
Listening.

. . . Reflects that these enjoy
Their country’s gratitude, that deep repose,
That peace no pain can break, no hurt destroy,
That rest, that sleep . . .

At Ghent the wind rose.
There was a smell of rain and a heavy drag
Of wind in the hedges but not as the wind blows
Over fresh water when the waves lag
Foaming and the willows huddle and it will rain:
I felt him waiting.

. . . Indicates the flag
Which (may he say) enisles1 in Flanders plain
This little field these happy, happy dead
Have made America . . .

. . . Dedicates to them
This earth their bones have hallowed, this last gift
A grateful country . . .

Under the dry grass stem
The words are blurred, are thickened, the words sift
Confused by the rasp of the wind, by the thin grating
Of ants under the grass, the minute shift
And tumble of dusty sand separating
From dusty sand. The roots of the grass strain,
Tighten, the earth is rigid, waits—he is waiting—
And suddenly, and all at once, the rain!

1 To set apart from others; isolate. Return to text. 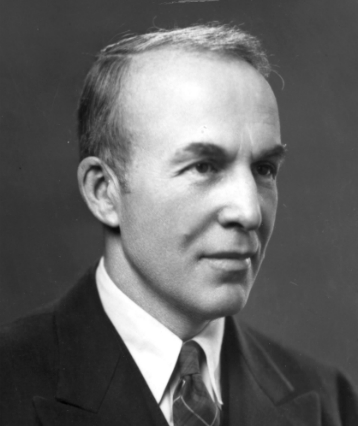