Our Flag by Frederic Edwin Church

Born in Hartford, Connecticut, Frederic Edwin Church (1826–1900) was one of the most prominent members of the Hudson River School of American landscape painters. The son of a wealthy jeweler, Church pursued his interest in art from an early age, facilitated by his father’s status and connections. In 1844, a family friend, Daniel Wadsworth—himself an amateur artist, arts patron, and founder of the Wadsworth Athenaeum Museum of Art—convinced the artist Thomas Cole to accept the young Church as a student. Church studied under the founder of the Hudson River School for two years, eventually becoming Cole’s most successful pupil. His teacher attested to Church’s talent, describing him as having “the finest eye for drawing in the world.”

In May 1848, at the age of 22, Church became the youngest Associate elected to the National Academy of Design. The following year he was promoted to Academician, earning full membership in the Academy alongside other artists such as Albert Bierstadt, Winslow Homer, and John Singer Sargent. In the early and mid-1850s, paintings such as Home by the Lake (1852), The Falls of Tequendama (1854), and Niagara (1857) won him much acclaim, with the latter—a seven-foot-wide portrait of Niagara Falls—especially bringing him to international prominence.

Inspired by naturalist Alexander von Humboldt’s multivolume work of geography and natural science, Cosmos, Church journeyed to South America in 1853 and 1857, visiting Colombia in the first expedition and Ecuador in the second. The sketches he completed on these journeys inspired paintings that further cemented Church’s fame. In 1859, he revealed The Heart of the Andes, an enormous painting over five feet high and almost ten feet wide. Framed in an elaborate window-like structure (complete with drawn-back curtains) and displayed in a darkened room strategically lit by skylights, the painting drew over 12,000 viewers in three weeks to its New York City premiere. It was also shown in Britain and seven other US cities, becoming the most popular single-artwork exhibit of the Civil War era. The Heart of the Andes eventually sold for $10,000—at the time the greatest sum ever paid for a work by a living American artist.

While he is best known for his diverse landscapes, Church also created patriotic works. His Our Banner in the Sky (c. 1861), depicts the famous American flag of Fort Sumter as part of a twilight scene, the colors blending with the sunset. The cover painting of this volume, Our Flag (1864) features the 31-star flag of the Union rising above the smoke of a battle. Describe what you see in the painting, concentrating on the placement of the flag and its relation to the rest. What message does the painting convey? What mood does it evoke? According to the painting, how solid is the Union? How well will it fare? 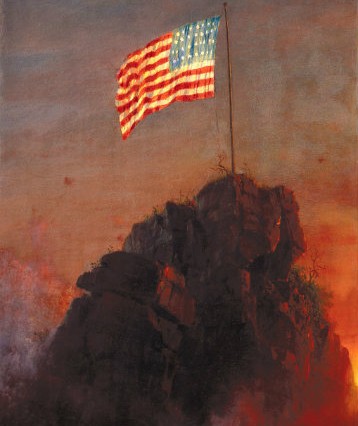