Think carefully about each occasion and its national and human significance. Although these events occurred at very different times and places, the flag raised was the same. Does the meaning of raising it also remain the same?

On April 14, 1865, as part of a celebration of the Union victory, Major General Robert Anderson (1805–71) raised the national flag in triumph over the battered remains of the fort—as ordered by President Abraham Lincoln earlier that spring.

Ordered, first. That at the hour of noon on the 14th day of April, 1865, Brevet Major-General Anderson will raise and plant upon the ruins of Fort Sumter, in Charleston Harbor, the same United States flag which floated over the battlements of that fort during the rebel assault, and which was lowered and saluted by him and the small force of his command when the works were evacuated on the 14th day of April, 1861.

Second. That the flag, when raised, be saluted by one hundred guns from Fort Sumter and by a national salute from every fort and rebel battery that fired upon Fort Sumter.

Third. That suitable ceremonies be had upon the occasion, under the direction of Major-General William T. Sherman, whose military operations compelled the rebels to evacuate Charleston, or, in his absence, under the charge of Major-General Q. A. Gillmore, commanding the department. Among the ceremonies will be the delivery of a public address by the Rev. Henry Ward Beecher.

Fourth. That the naval forces at Charleston and their commander on that station be invited to participate in the ceremonies of the occasion.

By order of the President of the United States.

President Harry S. Truman (1884–1972) made these remarks shortly before 4:00 pm on July 20, 1945 in the courtyard at the headquarters buildings. The flag used was the same one that had flown over the Capitol in Washington when war was declared on Germany.

This is an historic occasion. We have conclusively proven that a free people can successfully look after the affairs of the world.

We are here today to raise the flag of victory over the capital of our greatest adversary. In doing that, we must remember that in raising that flag we are raising it in the name of the people of the United States, who are looking forward to a better world, a peaceful world, a world in which all the people will have an opportunity to enjoy the good things of life, and not just a few at the top.

Let us not forget that we are fighting for peace, and for the welfare of mankind. We are not fighting for conquest. There is not one piece of territory, or one thing of a monetary nature that we want out of this war. We want peace and prosperity for the world as a whole. We want to see the time come when we can do the things in peace that we have been able to do in war.

If we can put this tremendous machine of ours, which has made this victory possible, to work for peace we can look forward to the greatest age in the history of mankind. That is what we propose to do.

On Raising the American Flag on the Moon

On July 20, 1969, Apollo 11 astronauts Edwin “Buzz” Aldrin Jr. (b. 1930) and Neil Armstrong (1930–2012) raised the Stars and Stripes on the lunar surface. The flag-raising itself was a feat of American technical ingenuity: NASA scientists had to especially engineer the flag assembly kit to support the flag on the airless Moon and make it appear to fly as it would on Earth. Although Congress passed a law repudiating any claim of sovereignty over the Moon, some argued that a United Nations flag should have been displayed in addition to—or in place of—the American flag. Aldrin disagreed: “I certainly felt that the American flag is what belonged there. It’s a characteristic of previous explorations, to plant a symbol upon arriving at a new shore.”

We didn’t know the President [Richard Nixon] was going to telephone us on the moon until about 10 seconds before it happened. At that point the ground told us to move over in the vicinity of the flag. Then we heard the President. Being able to salute that flag was one of the more humble yet proud moments I’ve ever had. To be able to look at that American flag and know how much so many people had put of themselves and their work into getting it where it was. We sensed—we really did—this almost mystical unification of all people in the world at that moment. 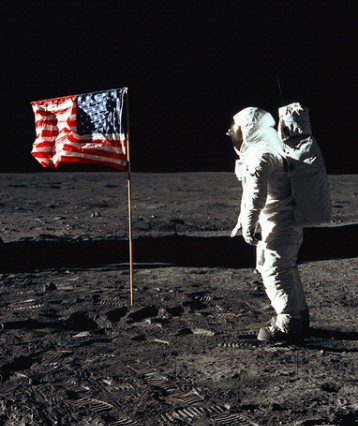 Abraham Lincoln, Ordering the Raising of the Flag and Other Commemorations at Fort Sumter

Harry S. Truman, Remarks at the Raising of the Flag Over the US group Control Council Headquarters in Berlin

Edwin E. Aldrin, Raising the Flag on the Moon