The Army Goes Rolling Along

This song is based on the “Caisson Song” written by field artillery First Lieutenant Edmund L. Gruber (1879–1941) while stationed in the Philippines in March 1908. Its original lyrics described the routine activities of a horse-drawn artillery battery, and it quickly became popular in field artillery units. (A caisson is a two-wheeled cart designed to carry artillery ammunition.) Nine years later, the great composer and bandmaster John Philip Sousa (1854–1932) was asked to transform the song into a march. Sousa’s version proved a chart-topper, becoming the Army’s most popular melody. In 1956, the song (with revised lyrics) was adopted as the official song of the Army. It is played at the conclusion of every Army ceremony, and all soldiers are expected to stand and sing.

What story does this song tell about the Army? What is the Army’s mission, and what challenges does it face? What are the main characteristics of the Army (and an Army soldier) as described by the song? Why does the song include a retreat (“Valley Forge”) and a disastrous defeat (“Custer’s ranks”) alongside the Army’s achievements? What is the meaning of its title, and what does it suggest about the Army? Why do you think the Army chose this song as its anthem? How does it compare to the anthems of the other military branches?

(Refrain)
Then it’s Hi! Hi! Hey!
The Army’s on its way.
Count off the cadence loud and strong (TWO! THREE!)
For where e’er we go,
You will always know
That The Army Goes Rolling Along.

Men in rags, men who froze,
Still that Army met its foes,
And the Army went rolling along.
Faith in God, then we’re right,
And we’ll fight with all our might,
As the Army keeps rolling along.

1 Valley Forge, Pennsylvania was the site of the military camp of General George Washington’s army over the winter of 1777–78 during the American Revolutionary War. George Armstrong Custer (1839 –76) was a cavalry commander in the Civil War and the Indian Wars; he was killed during the disastrous Battle of Little Big Horn. The Battle of San Juan Hill (July 1, 1898) was a decisive victory for the US Army during the Cuban campaign of the Spanish–American War. General George Smith Patton Jr. (1885–1945) was best known for his command of the Seventh United States Army, and later the Third United States Army, in the European Theater of World War II. Return to text.
Return to The Meaning of Veterans Day. 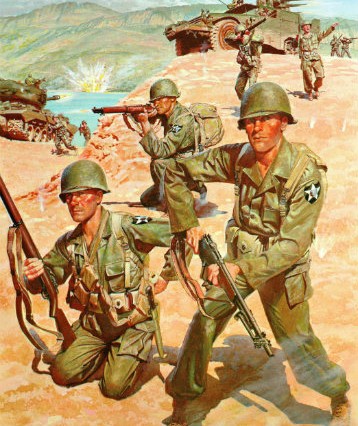