The Ballot or the Bullet

At the same time that King and his followers were practicing nonviolent direct action to awaken the conscience of the nation, a different—and more radical—strategy for improving the lives of African Americans was being advanced by Malcolm X (born Malcolm Little in 1925; died, as El-Hajj Malik El-Shabaz, in 1965). After a dissolute life lived on the edge (described in his 1965 Autobiography of Malcolm X), Malcolm came to prominence once he joined the Nation of Islam (NOI) and, as its most articulate public spokesman, began spreading its teaching of black supremacy and black separatism. Disillusioned with NOI’s founder, Elijah Muhammad, Malcolm left the organization in March 1964, and within the year, after a trip to Mecca and a conversion to the “true Islam,” he publicly renounced racialist thinking and embraced a multi-racial search for human betterment. Before he had a chance to develop his programmatic ideas in America, he was assassinated in February 1965 by members of the NOI. Malcolm’s greatest speech, here selected, was given in Cleveland on April 3, 1964, shortly after his break with Elijah Muhammad—seven months after the March on Washington and three months before the passage of the Civil Rights Act.*

What does Malcolm X mean by presenting, as the exclusive alternatives available to black Americans, “the ballot or the bullet”? What does he mean by saying that “a ballot is like a bullet”? Why does he reject the call for “civil rights,” in favor of “human rights”? What is the philosophy—political, economic, and social—of black nationalism? Is Malcolm X right in claiming that American blacks are really Africans, and nothing but Africans? Why does Malcolm X object to the teaching and tactics of nonviolence, and why does he call the gospel of Christ “white nationalism”? Whereas King and Joseph H. Jackson explicitly appeal to American principles and the Constitution, Malcolm X does not. To what extent is Malcolm’s position philosophically compatible with American principles and law? To what extent do his black nationalist teachings provide a successful strategy for black Americans? For the country as a whole?

* Click here to listen to a recording of the speech.

Mr. Moderator, Brother Lomax, brothers and sisters, friends and enemies: I just can’t believe everyone in here is a friend, and I don’t want to leave anybody out. The question tonight, as I understand it, is “The Negro Revolt, and Where Do We Go From Here?” or What Next?” In my little humble way of understanding it, it points toward either the ballot or the bullet. 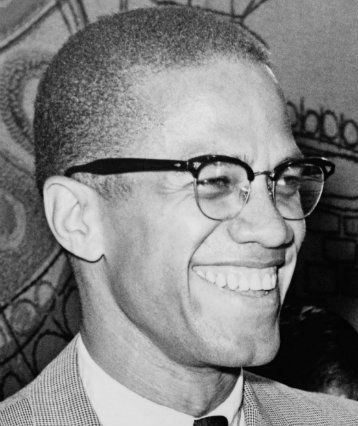