John Dickinson (1732–1808), known as the “Penman of the Revolution” for his Letters from a Farmer in Pennsylvania, was, at various times, a militia officer in the Revolutionary War, a member of the First and Second Continental Congresses, a primary drafter of the Articles of Confederation, a delegate to the Constitutional Convention of 1787, and the state president of Delaware (1781) and Pennsylvania (1782).

His pre-Revolutionary song, “The Liberty Song,” is set to the tune of “Heart of Oak,” the anthem of the Royal Navy of the United Kingdom. Dickinson sent the words he composed for the song to his Massachusetts friend James Otis, saying, “I enclose you a song for American freedom. I have long since renounced poetry, but as indifferent songs are very powerful on certain occasions, I venture to invoke the deserted muses.” The song was soon thereafter published in the Boston Gazette, in July 1768; the words that appear here are from its updated 1770 version. Dickinson’s sixth verse marks the first appearance of the patriotic slogan, “united we stand, divided we fall.”

What is the meaning of the “liberty” or “freedom” of which this song speaks? Was John Dickinson right to think that this “indifferent song” could make a “very powerful” difference? Why? Dickinson, as we noted above in “A Brief History of Independence,” later looked for reconciliation with Britain and, at the Continental Congress in 1776, argued (and voted) against declaring independence. What condition of liberty, then, is called for in this song? The final stanza toasts King George’s health and Britannia’s glory and wealth, if somewhat conditionally. Is the song, then, pointing toward a restoration of British liberty or the triumph of a new and separate form of American liberty?

For a musical rendition, view this performance by Adam Eisenstein.

Come, join, Hand in Hand, brave Americans all,
And rouse your bold Hearts at fair Liberty’s call,
No tyrannous Acts shall suppress your just Claim,
Or stain with dishonor America’s Name.

(Chorus)
In Freedom we’re born, and in Freedom we’ll live.
Our purses are ready. Steady, friends, steady,
Not as Slaves, but as Freemen our money we’ll give.

Our worthy Forefathers—let’s give them a cheer—
To Climates unknown did courageously steer;
Thro’ Oceans to Deserts for Freedom they came,
And dying bequeath’d us their Freedom and Fame.

Their generous Bosoms all Dangers despis’d,
So highly, so wisely, their Birthrights they priz’d;
We’ll keep what they gave—we will piously keep,
Nor frustrate their Toils on the Land and the Deep.

The Tree, their own Hands had to Liberty rear’d;
They liv’d to behold growing strong and rever’d;
With Transport they cried, “Now our wishes we gain,
For our Children shall gather the Fruits of our Pain.”

Swarms of placemen and pensioners soon will appear
Like locusts deforming the charms of the year;
Suns vainly will rise, showers vainly descend,
If we are to drudge for what others shall defend.

Then join Hand in Hand brave Americans all,
By uniting we stand, by dividing we fall;
In so righteous a Cause let us hope to succeed,
For Heaven approves of each generous Deed.

All Ages shall speak with amaze and applause,
Of the courage we’ll shew in support of our laws;
To die we can bear—but to serve we disdain—
For Shame is to Freedom more dreadful than Pain.

This bumper1 I crown for our Sovereign’s health,
And this for Britannia’s Glory and Wealth;
That Wealth and that Glory immortal may be,
If She is but Just—and if we are but Free.

1 A brimming cup or glass. Return to text. 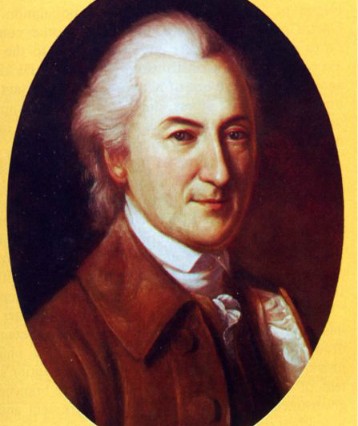