The Origins and Traditions of Independence Day

The actual birthdate of the American Republic was July 2, 1776, when delegates to the Continental Congress, meeting at the Pennsylvania State House in Philadelphia, approved the resolution introduced on June 7, 1776 by Richard Henry Lee of Virginia calling for independence from Great Britain: “That these United Colonies are, and of right ought to be, free and independent States.” Two days later, the body adopted the more well known Declaration of Independence, which justified the deed by “declar[ing] the causes which impel them to the separation.”

Marking the remembrance of Independence Day with speeches, parades, music, and fireworks, colonial Americans began a tradition that largely continues to this day. Congress officially recognized the holiday in its first holiday act on June 28, 1870. Over time, however, the significances and meanings of the day have evolved with the country whose independence we celebrate, and citizens should once again ask—to draw from the question Frederick Douglass posed in 1852—“What to the American is the Fourth of July?”

The day after Congress voted to declare independence, John Adams wrote to his wife, Abigail, declaring that “the Second Day of July 1776, will be the most memorable Epoch, in the History of America”:

I am apt to believe that it will be celebrated, by succeeding Generations, as the great anniversary Festival. It ought to be commemorated, as the Day of Deliverance by solemn Acts of Devotion to God Almighty. It ought to be solemnized with Pomp and Parade, with Shews, Games, Sports, Guns, Bells, Bonfires and Illuminations from one End of this Continent to the other from this Time forward forever more.

Others present for the debate likewise felt that the second day of July would be the one to go down in history. On the fourth, the vote to adopt the Declaration was taken in the morning, and Thomas Jefferson—the document’s main author—spent the rest of the afternoon shopping for ladies’ gloves and a new thermometer. The next morning, though, Philadelphia printer John Dunlap had copies of the Declaration ready for members to send out, and the Pennsylvania Evening Post printed the text of the document on its front page on July 6.

As the words of the Declaration spread throughout the colonies, so too did celebrations of their arrival. On July 8, the Declaration was read to a crowd gathered at the Pennsylvania State House Yard and was met by drums, bonfires, celebratory cannon, and parades. The next day, General George Washington had the document read to his fledgling army assembled in New York. In New York City, Americans pulled down the equestrian statue of King George III, chopping it into pieces and—according to tradition—fashioning bullets out of the metal. Celebrants in Savannah, Georgia, receiving the news in August, staged four public readings of the Declaration of Independence and then concluded their day-long celebration with a mock burial of George III.

As historian David Waldstreicher has pointed out, these initial celebrations “were at once spontaneous and at the same time—and in a strikingly modern sense—media events.” Drawing from the English tradition of publicly celebrating—and, at times, protesting—the monarch’s birthday, Americans used the customs of older celebrations (e.g., ringing bells and lighting bonfires) and adapted them to mark the breaking of ties with the monarch, instead of celebrating his birth. The message to the British could not have been clearer.

These celebrations continued and expanded on each subsequent Fourth of July during the Revolution. In 1777, Philadelphia hosted an elaborate “demonstration of joy and festivity,” complete with armed and decorated warships and performances by the Hessian band captured by the American army at the Battle of Trenton the previous December. As one newspaper recorded, “[t]he evening was closed with the ringing of bells, and at night there was a grand exhibition of fireworks, which began and concluded with thirteen rockets on the commons . . . Every thing was conducted with the greatest order and decorum, and the face of joy and gladness was universal. Thus may the 4th of July, that glorious and ever memorable day, be celebrated through America, by the sons of freedom, from age to age till time shall be no more. Amen, and amen.”

These July 4 celebrations did more than boost morale or signal to King George the colonists’ displeasure and newly-declared independence. As Waldstreicher explains, they also served as a dialogue between Americans about what, exactly, it meant to be American:

The need of the revolutionary movement to simultaneously practice politics and create national unity only raised the stakes of celebrating national holidays. The trend in the early republic would be for July Fourth, and other celebrations modeled on the Fourth, to spread nationalism and at the same time, to provide venues for divisive political expression. In this way, Americans learned to be American and to practice partisanship without any sense of contradiction. Just as they blamed the British while claiming and using British traditions, they used the Fourth of July to praise and criticize their governments and each other, in the process struggling over who, and what, was truly American.

Following independence—officially won on September 3, 1783, with the signing of the Treaty of Paris—Americans continued to use the national holiday for political discussion. In 1788, political factions in New York sparred over the proposed Constitution (then already ratified by all of the states except New York, North Carolina, and Rhode Island), while in Rhode Island over a thousand citizens, led by Superior Court Judge William Weston, attempted to prevent others from celebrating the proposed Constitution as part of their Fourth of July festivities. In the early 1790s, the nation’s first political parties—the

Federalists and the Democratic-Republicans—began to hold separate Independence Day celebrations. (Continuing the political meaning of holidays, the Federalists also made a point to celebrate George Washington’s birthday, while the Democratic-Republicans celebrated important dates in the French Revolution or the anniversary of Thomas Jefferson’s election to the presidency.)

The first half of the 19th century was filled with “firsts” and the establishment of Independence Day celebrations that we continue today. The year 1801 marked the first public Fourth of July reception at the White House. In Hawaii, the day was first celebrated in 1814. In 1826, on the holiday’s 50th anniversary, communities heard from some of the remaining patriots of ’76, many of whom read the Declaration of Independence and offered their thoughts on the current state of affairs. (That July Fourth also marked the deaths of two signers of the Declaration, John Adams and Thomas Jefferson.) And on July 4, 1848, President James K. Polk helped to lay the cornerstone of the Washington Monument in the nation’s capital.

In the lead up to the Civil War, Americans’ Independence Day celebrations became increasingly divided. Abolitionists used the day to criticize slavery and the political institutions that enabled it, with Frederick Douglass presenting his famous speech “What to the Slave Is the Fourth of July?” on July 4, 1852. Two years later, William Lloyd Garrison celebrated the holiday by publicly burning printings of the Constitution, which he labeled “a covenant with death, and an agreement with hell.” (“And let all the people say, Amen!” he declared when he was finished.) On July 4, 1859, Robert Barnwell Rhett, a Southern politician and in many ways Garrison’s opposite, gave a speech in Grahamville, South Carolina advocating for secession.

Following the Civil War, many whites in the South refused to celebrate the holiday (it wasn’t until 1901 that whites in Jackson, Mississippi, for example, reclaimed their tradition of reading the Declaration of Independence on the Fourth), while newly-freed blacks celebrated the day with gusto. On July 4, 1865, Freedmen celebrations occurred in Raleigh, North Carolina and Warren, Ohio, and the Colored People’s Educational Monument Association hosted the first national celebration by African Americans in Washington, DC. Many communities also added a reading of the Emancipation Proclamation to their Fourth of July celebrations. In 1870, the United States Congress made Independence Day an unpaid holiday for federal workers. (Only in 1938 would Congress make it a paid holiday.)

In the early 20th century, many cities used the day to focus on what it means to become an American: Kansas City, Missouri hosted an “Americanization Day” in 1915, at which 220 new citizens sang patriotic songs. Three years later, shortly before the conclusion of World War I, cities such as Philadelphia, New York City, and Washington, DC held “melting-pot” celebrations, showcasing hundreds of thousands of foreign-born Americans and their traditions in an assortment of parades and celebrations.

By the 150th anniversary of the adoption of the Declaration of Independence in 1926, Americans’ Independence Day traditions had largely been set—and continue to this day. Military bases offer an afternoon “Salute to the Union,” ceremonially firing off a cannon or gun for each state of the Union, a tradition officially begun by the War Department in 1810. New states to the Union are also added as stars on the American flag on the Fourth of July following their admittance. And on a smaller scale, Americans today continue to join their ancestors by celebrating the day with parades, patriotic songs, speeches, American flags, and, of course, fireworks. 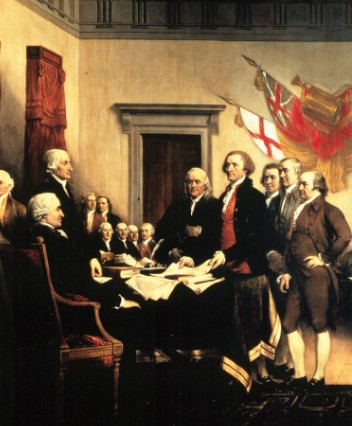