The Significance of Columbus Day to New Americans

As was noted in “The Origins and Traditions of Columbus Day,” the early celebrations of Columbus Day, occurring in the 19th century, focused not on Columbus as explorer or symbolic founder but on Columbus as immigrant. American Catholics, and Italian Americans in particular, invoked the figure of Columbus—as immigrant, Italian, and Catholic—to counteract the ardent anti-immigrant and anti-Catholic activism from which they were suffering. This editorial, published in The Independent, a New York City magazine, in 1910 before Columbus Day became a legal holiday, explains why the holiday should matter to American immigrants.

What, according to this editorial, is the importance of Columbus Day? How can it be both a religious and a patriotic holiday? Although the editorial begins by saying that “Columbus Day belongs to our Catholic people,” it proceeds to suggest the importance of religion for all American citizens. What do you think of that suggestion, both for the time in which the editorial was written and for the present time?

Columbus Day is not yet generally recognized as a legal holiday, but a real holiday it is wherever a large part of the people desire it as their religious festival. For it has been created for Catholics, particularly immigrant Catholics and their children, the special Catholic holiday of the year, something like the Sunday school children’s festival day in Brooklyn and some other cities, when they march in procession and hear speeches. Christmas and Thanksgiving are religious or family holidays for all the people; Columbus Day belongs to our Catholic people.

The choice of the day is a happy one. Columbus was the first immigrant to America. He was an Italian; he was a Catholic. There have been efforts made, and some progress in them, to have him canonized as a saint in the Roman Catholic Church. The search for miracles thru his intercession, we believe, has not yet been successful, but with the new honor given to him, and the attention called to his religious spirit, it will be strange if a sufficient number of cures of the sick thru his mediation shall not be found to warrant his addition to the number of saints. He labored enough; he suffered enough; he had wonderful prophetic vision. Let him be the favorite saint of our Italian immigrants, of our Spanish citizens, and let our Irish Catholics honor him next to St. Patrick. We wonder that we have never yet had a legal St. Patrick’s holiday here in New York. Why have our Irish rulers preferred the worship of their Indian Saint Tammany!1

Last week was Columbus Day in the large cities which are now possessed by our Catholic immigrants and their descendants. President Taft stood with head uncovered for hours while the procession passed by. Archbishop O’Connell reviewed the procession and he preached the commemorative sermon. Fifty thousand people took part in the Boston procession, and the rivalry for the first prize in the “floats” went to an Italian society. They marched by nationalities. Italians, Irish, French, Spanish, Hungarians and all the rest. They marched in soldierly fashion; and very marked was the order of the men who had served their three years in a European army. It was a most inspiring sight, whether in Boston, or in dozens of other cities, where the Catholic population dominates, as it does in New York, and even, slightly, in Philadelphia.

While the constituents of the magnificent processions are of differing nationalities, the one thing that unifies them is their religion. They are all Catholic. The North of Ireland Orangemen take no part in it, nor the Scotch, nor the Lutherans of Germany. There is a Catholic organization known as the Knights of Columbus, and they have given a nucleus for the celebration of the day. So far as the Italians are concerned we do not suppose that the religious spirit controls their celebration, but they still call themselves Catholics, and they are naturally better Catholics in this country, where the Church is free from the State, than they were at home.

It is properly a matter of gratification and pride that this new Columbus Day is so enthusiastically celebrated. It goes for patriotism; it goes for religion. The great danger for our immigrants is that their children will lose with their religion that control of moral restraint which has kept their fathers decent. Nor is this a danger of Catholic immigrants alone; we see it in our Jewish population, and to a considerable extent in our own native Protestant population. So far as superstition has kept them in control, that is fast being lost. As fast as they can get out of parental rule young Jews in multitudes are forgetting to fast on Yom Kippur, while Sabbath is a forgotten day. There is growing up a race of hoodlums, “Apaches,” utterly lawless, irreligious and immoral. Over them priest or preacher or rabbi has no influence. If they ever had the parochial school they hated it and despise it. They have utterly broken off from their old religion and have but a dim, but unpleasant, memory of it. Possibly the reaction will come with their children, who will have no bitter religious hostilities, only utter indifference; and who may be more accessible to the influences that will be brought by the Church. There is some hope there. We remember the irreligiousness of this country at the end of the eighteenth century and the wonderful reaction that followed.2

So far as the Catholic Church is concerned, we believe it will yet recover its young people that have gone astray, or that they will join other religious bodies. The free spirit and the intelligence of the day into which our immigrants have entered quite overturn all that faith which rests on superstition. The protest of our youth against the religion of their parents is largely intellectual. They cannot believe what was taught them as truth, and when told that they must believe they rebel. In our own land the superstitions attached to the Catholic Church have been largely cleansed away. Intelligent priests do not teach them, and intelligent Catholics do not believe them. They are retained only as useful for the control of the more ignorant. Even abroad the process is going on, and we hear of several saints lately dropped from the martyrology. But these reforms go too slowly, and Lourdes and St. Ann still multiply their miracles, and the people kneel in earnest petition that the blood may be liquefied which will insure the mediation of the saint and avert the cholera.

This happens to be an unfortunate time for the Roman Church. It is a period of intellectual repression and of ecclesiastical tyranny. In Europe those who hate the Church are rejoicing in the blindness of the Vatican, which has blundered with extraordinary persistence. It has blundered politically, and no less in its restraint of intellectual freedom. It has set France and Spain and Portugal against it, while it has forbidden its students for the priesthood to see any light but its own, and it has set spies over its very teachers of theology in fear that they may question in their hearts. Of course, this is resented in high ecclesiastical circles. The tyranny of the Archbishop of Boston angers his priests. These things will not last. The days of Pius X will come to an end; and when the reaction comes it is impossible that under a new Leo there shall not be more liberty and less antagonism to the spirit which searches everywhere for truth, even the new truth as well as that a thousand years old and musty. We believe in Columbus Day.

1 Tamanend or Tammany (c. 1628–c.1698), a Delaware chief friendly to William Penn and the Pennsylvania colonists. Saint Tammany Day was celebrated on May 1, replacing the British May Day tradition, and championed by the Tammany Society, a fraternal order whose early members included Benjamin Franklin, John Adams, and Benjamin Rush. Return to text.

2 The Great Awakening, an American religious revival occurring between the early 18th century and the late 19th century. Return to text. 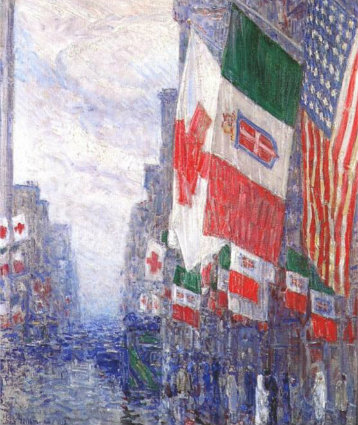