Many of the songs sung during the Revolutionary War were originally drinking songs or toasts. This is true of this song (1780) attributed to Henry Archer (dates unknown), a Scotsman who came to America in 1778 and volunteered in the Continental Army, and of the next, a drinking song favored by Tories and British military men called “The Rebels.” As we do not have the music or a recording to teach us the melody, you will have to capture its rousing punch by declaiming it, preferably in a large voice.

What is a toast, and what is the purpose of a drinking song? What is the contrast drawn, especially in the first stanza, between the toasts of lovers and fighters? Why are the latter regarded as superior? Why the emphasis throughout on volunteers? What does that emphasis tell you about the Revolution and those who fought it? The volunteers appear to come from every walk of life and even every class. What does that say about the character of the Revolution and those who fought it?

Hence with the lover who sighs o’er his wine,
Chloes and Phillises toasting,
Hence with the slave who will whimper and whine,
Of ardor and constancy boasting.
Hence with love’s joys,
Follies and noise,
The toast that I give is the Volunteer Boys.

Nobles and beauties and such common toasts,
Those who admire may drink, sir;
Fill up the glass to the volunteer hosts,
Who never from danger will shrink, sir.
Let mirth appear,
Every heart cheer,
The toast that I give is the brave volunteer.

Here’s to the squire who goes to parade,
Here’s to the citizen soldier;
Here’s to the merchant who fights for his trade,
Whom danger increasing makes bolder.
Let mirth appear,
Union is here,
The toast that I give is the brave volunteer.

Here’s to the lawyer, who leaving the bar,
Hastens where honor doth lead, sir,
Changing the gown for the ensigns of war,
The cause of his country to plead, sir.
Freedom appears,
Every heart cheers,
And calls for the health of the law volunteers.

Here’s to the soldier, though battered in wars,
And safe to his farm-house retired;
When called by his country, ne’er thinks of his scars,
With ardor to join us inspired.
Bright fame appears,
Trophies uprear,
To veteran chiefs who became volunteers.

Here’s to the farmer who dares to advance
To harvests of honor with pleasure;
Who with a slave the most skilful in France,
A sword for his country would measure.
Hence with cold fear,
Heroes rise here;
The ploughman is changed to the stout volunteer.

Here’s to the peer, first in senate and field
Whose actions to titles add grace, sir;
Whose spirit undaunted would never yet yield
To a foe, to a pension or place, sir.
Gratitude here,
Toasts to the peer,
Who adds to his titles, “the brave volunteer.” 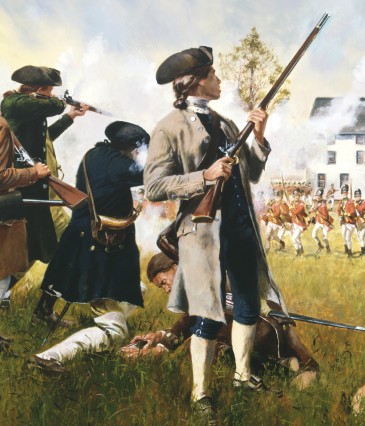