Born in New York City, Emma Lazarus (1849–87) was one of the first prominent Jewish American poets. She is most famous for her 1883 sonnet, “The New Colossus,” which describes the hope of immigrants looking for a new life in the United States. In 1902, 15 years after her death, excerpts from the poem were inscribed on the Statue of Liberty, immortalizing Lazarus’ contribution to American literature.

Lazarus was a Sephardic Jew, a descendant of people expelled from Spain centuries before. She grew up in an affluent family, dividing her time between New York City and Newport, Rhode Island. She was educated by private tutors with whom she studied literature, classical and modern languages, and music. As a young woman, she began her poetry career by translating German poems, and later self-published her first collection, Poems and Translations: Written Between the Ages of Fourteen and Sixteen in 1866. Her precocious writings attracted the attention of fellow poet Ralph Waldo Emerson, to whom she dedicated her 1871 book, Admetus and Other Poems. At the height of her career in the 1880s, Lazarus published some of her most well-known works including Songs of a Semite, a collection of poems that explored her Jewish heritage. She also became a tireless advocate for disenfranchised immigrants, who were then coming to America by the thousands.

The first eight lines of the poem compare the Statue of Liberty to the ancient Colossus of Rhodes. How are the two statues different? Why does Lazarus draw the comparison? What does it tell us about the Statue of Liberty (and, by extension, America)? What is the meaning of the statue’s speech? Why does the statue extend a special welcome to the poor and oppressed? Why do you think this poem was successful in raising money for the statue’s pedestal?

Not like the brazen giant of Greek fame,
With conquering limbs astride from land to land;
Here at our sea-washed, sunset gates shall stand
A mighty woman with a torch, whose flame
Is the imprisoned lightning, and her name
Mother of Exiles. From her beacon-hand
Glows world-wide welcome; her mild eyes command
The air-bridged harbor that twin cities frame.
“Keep, ancient lands, your storied pomp!” cries she
With silent lips. “Give me your tired, your poor,
Your huddled masses yearning to breathe free,
The wretched refuse of your teeming shore.
Send these, the homeless, tempest-tost to me,
I lift my lamp beside the golden door!” 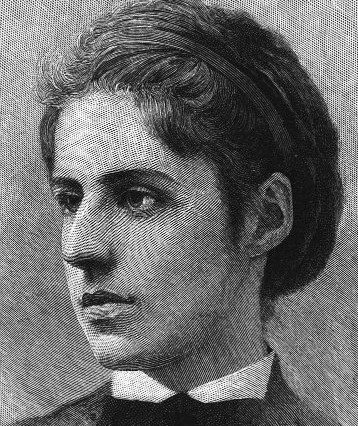