The Great Seal of the United States

Most nations have national seals, signifying their status as sovereign nations, bearing mottoes and emblems dear to them, and used to mark the most important official documents. Our national seal is widely seen yet little noticed. Most Americans, in fact, hold it in their hands on a daily basis: images of its two sides appear on the back of every one-dollar bill.*

Like the republic it represents, the Great Seal bears the marks of its origin in democratic deliberation. Each of its various details was hotly debated, including, on its obverse (or front), the bald eagle and the bundle of arrows and olive branch in the eagle’s talons, and, on its reverse (or back), the unfinished pyramid, the Roman numerals at the pyramid’s base, and the eye of Providence above. And, to complicate things further, not one but three mottoes were affixed to the seal. Each is in Latin: E Pluribus Unum (Out of many, one), Annuit Coeptis (He has approved of our undertakings), and, borrowed from Virgil, Novus Ordo Seclorum (A new order of the ages).

Many subscribe to the adage “A picture is worth a thousand words.” Is this the case with the Great Seal of the United States? Can you weave a coherent story from the images affixed on it? Or, are the images—and mottoes—in tension? Why are the mottoes of the United States in Latin rather than English, and what difference does that make? How does the obverse differ from the reverse, and what picture of the nation does each side convey? What feelings do the images evoke in you?**

*The seal is even older than the Constitution. On the day the Declaration of Independence was signed, July 4, 1776, a committee comprising Benjamin Franklin, John Adams, and Thomas Jefferson was appointed to design the seal for the newly independent United States of America. The task proved more difficult than expected, requiring six years, two more committees, and the combined efforts of fourteen men before it was completed. The final version, the Great Seal of the United States, combining features suggested by each of the three committees, was designed by Charles Thomson of Philadelphia (1729–1824), secretary of the Continental Congress. On June 20, 1782, Congress adopted the seal and also Thomson’s accompanying “Remarks and Explanations”:

The Escutcheon [shield] is composed of the chief [upper part of shield] & pale [perpendicular band], the two most honorable ordinaries [figures of heraldry]. The Pieces, paly [alternating pales], represent the several states all joined in one solid compact entire, supporting a Chief, which united the whole and represents Congress. The Motto alludes to this union. The pales in the arms are kept closely united by the Chief and the Chief depends on that union & strength resulting from it for its support, to denote the Confederacy of the United States of America & the preservation of their union through Congress.

The colours of the pales are those used in the flag of the United States of America; White signifies purity and innocence, Red, Hardiness & valour, and Blue, the colour of the Chief signifies vigilance, perseverance & justice The Olive branch and arrows denote the power of peace & war which is exclusively vested in Congress. The Constellation denoted a new State taking its place and rank among other sovereign powers. The Escutcheon is born on the breast of an American Eagle without any other supporters to denote that the United States of America ought to rely on their own Virtue [power]. Return to text.

**Reverse. The pyramid signifies Strength and Duration: the Eye over it and the Motto allude to the many signal interpositions of providence in favour of the American cause. The date underneath is that of the Declaration of Independence and the words under it signify the beginning of the New American Era, which commences from that date. Return to text. 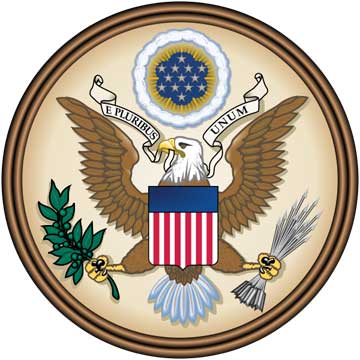 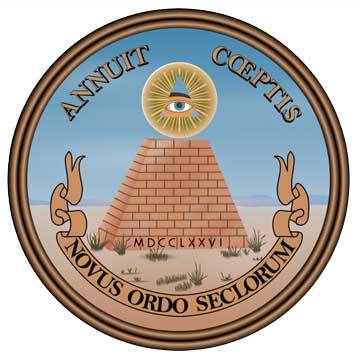 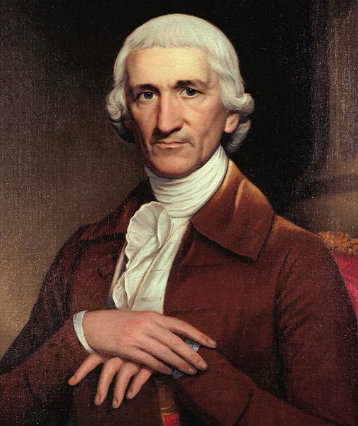