Joaquin Miller (pen name of Cincinnatus Hiner Miller; 1837–1913) was an American poet whose work was popular in England, in part because it was so distinctly American. Nicknamed the “Poet of the Sierras,” Miller wrote about the adventurous life he led, having worked at various times as a mining-camp cook, rider on the Pony Express, horse thief, newspaper correspondent, judge, and politician. In 1892, he composed “Columbus” for the 400th anniversary of the discovery of America, praising the explorer for his unrelenting adventurous spirit.

For decades this poem, memorized by millions of schoolchildren, rivaled the Gettysburg Address in popularity. What, according to the poem, is Columbus’ unique virtue? In the last stanza, examine and interpret the images of darkness and light; the speck of light and the starlit flag into which it grew; and its further growth to become “Time’s burst of dawn.” Can you make sense of the claims of the last two lines of the poem, about Columbus and about his “grandest lesson” to “that world”?

Behind him lay the gray Azores,
Behind the Gates of Hercules;
Before him not the ghost of shores;
Before him only shoreless seas.
The good mate said: “Now must we pray,
For lo! the very stars are gone.
Brave Adm’r’l, speak; what shall I say?”
“Why, say, ‘Sail on! sail on! and on!’”

“My men grow mutinous day by day;
My men grow ghastly, wan and weak.”
The stout mate thought of home; a spray
Of salt wave washed his swarthy cheek.
“What shall I say, brave Adm’r’l, say,
If we sight naught but seas at dawn?”
“Why, you shall say at break of day:
‘Sail on! sail on! sail on! and on!’”

They sailed and sailed, as winds might blow,
Until at last the blanched mate said:
“Why, now not even God would know
Should I and all my men fall dead.
These very winds forget their way,
For God from these dread seas is gone.
Now speak, brave Adm’r’l, speak and say”—
He said: “Sail on! sail on! and on!”

Then, pale and worn, he kept his deck,
And peered through darkness. Ah, that night
Of all dark nights! And then a speck—
A light! A light! At last a light!
It grew, a starlit flag unfurled!
It grew to be Time’s burst of dawn.
He gained a world; he gave that world
Its grandest lesson: “On! sail on!” 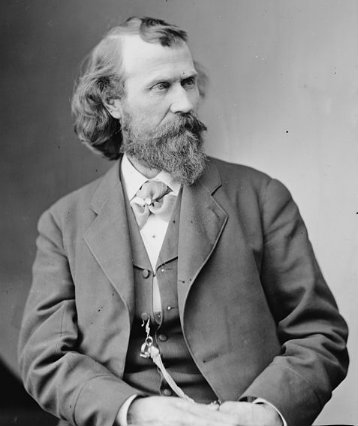