Declaration and Resolves of the First Continental Congress

A decisive step in the march toward American independence was the convening of the First Continental Congress in Philadelphia in September 1774. Parliament, earlier in 1774, in reaction to the Boston Tea Party (December 1773), had passed a series of tough laws—known in America as the Intolerable Acts or the Coercive Acts—aimed at punishing the people of Boston and Massachusetts, and at strengthening Parliament’s rule over all the colonies. Recognizing that this threat to one colony was in fact a threat to all, 56 representatives from 12 of the American colonies convened to produce a collective response. Some of the delegates already inclined toward independence, others strongly favored reconciliation but with redress of grievances. Despite large differences within the group, this statement, with its declaration of rights and specific resolutions, was adopted by the Congress on October 14, 1774.

What are the particular complaints or grievances expressed by the Congress? What is the tone of the Declaration, and what seems to be its desired effect and outcome? Do you regard it as a revolutionary document? If you were a delegate to the First Continental Congress, would you have signed it? Why or why not? If you were King George or a member of the British Parliament, how would you have received this Declaration and these Resolves, and what action would you have taken or recommended? How might the issuing of this Declaration have contributed to uniting the colonists?

Whereas, since the close of the last war, the British parliament, claiming a power, of right, to bind the people of America by statutes in all cases whatsoever, hath, in some acts, expressly imposed taxes on them, and in others, under various presences, but in fact for the purpose of raising a revenue, hath imposed rates and duties payable in these colonies, established a board of commissioners, with unconstitutional powers, and extended the jurisdiction of courts of admiralty, not only for collecting the said duties, but for the trial of causes merely arising within the body of a county:

And whereas, in consequence of other statutes, judges, who before held only estates at will in their offices, have been made dependant on the crown alone for their salaries, and standing armies kept in times of peace: And whereas it has lately been resolved in parliament, that by force of a statute, made in the thirty-fifth year of the reign of King Henry the Eighth, colonists may be transported to England, and tried there upon accusations for treasons and misprisions, or concealments of treasons committed in the colonies, and by a late statute, such trials have been directed in cases therein mentioned:

And whereas, assemblies have been frequently dissolved, contrary to the rights of the people, when they attempted to deliberate on grievances; and their dutiful, humble, loyal, and reasonable petitions to the crown for redress, have been repeatedly treated with contempt, by his Majesty’s ministers of state:

The good people of the several colonies of New-Hampshire, Massachusetts-Bay, Rhode Island and Providence Plantations, Connecticut, New-York, New-Jersey, Pennsylvania, Newcastle, Kent, and Sussex on Delaware, Maryland, Virginia, North- Carolina and South-Carolina, justly alarmed at these arbitrary proceedings of parliament and administration, have severally elected, constituted, and appointed deputies to meet, and sit in general Congress, in the city of Philadelphia, in order to obtain such establishment, as that their religion, laws, and liberties, may not be subverted: Whereupon the deputies so appointed being now assembled, in a full and free representation of these colonies, taking into their most serious consideration, the best means of attaining the ends aforesaid, do, in the first place, as Englishmen, their ancestors in like cases have usually done, for asserting and vindicating their rights and liberties, DECLARE,

Resolved, N.C.D.2 1. That they are entitled to life, liberty and property: and they have never ceded to any foreign power whatever, a right to dispose of either without their consent.

Resolved, N.C.D. 2. That our ancestors, who first settled these colonies, were at the time of their emigration from the mother country, entitled to all the rights, liberties, and immunities of free and natural-born subjects, within the realm of England.

Resolved, N.C.D. 3. That by such emigration they by no means forfeited, surrendered, or lost any of those rights, but that they were, and their descendants now are, entitled to the exercise and enjoyment of all such of them, as their local and other circumstances enable them to exercise and enjoy.

Resolved, 4. That the foundation of English liberty, and of all free government, is a right in the people to participate in their legislative council: and as the English colonists are not represented, and from their local and other circumstances, cannot properly be represented in the British parliament, they are entitled to a free and exclusive power of legislation in their several provincial legislatures, where their right of representation can alone be preserved, in all cases of taxation and internal polity, subject only to the negative of their sovereign, in such manner as has been heretofore used and accustomed: But, from the necessity of the case, and a regard to the mutual interest of both countries, we cheerfully consent to the operation of such acts of the British parliament, as are bonfide, restrained to the regulation of our external commerce, for the purpose of securing the commercial advantages of the whole empire to the mother country, and the commercial benefits of its respective members; excluding every idea of taxation internal or external, for raising a revenue on the subjects, in America, without their consent.

Resolved, N.C.D. 5. That the respective colonies are entitled to the common law of England, and more especially to the great and inestimable privilege of being tried by their peers of the vicinage, according to the course of that law.

Resolved, N.C.D. 6. That they are entitled to the benefit of such of the English statutes, as existed at the time of their colonization; and which they have, by experience, respectively found to be applicable to their several local and other circumstances.

Resolved, N.C.D. 7. That these, his Majesty’s colonies, are likewise entitled to all the immunities and privileges granted and confirmed to them by royal charters, or secured by their several codes of provincial laws.

Resolved, N.C.D. 8. That they have a right peaceably to assemble, consider of their grievances, and petition the king; and that all prosecutions, prohibitory proclamations, and commitments for the same, are illegal.

Resolved, N.C.D. 9. That the keeping a standing army in these colonies, in times of peace, without the consent of the legislature of that colony, in which such army is kept, is against law.

Resolved, N.C.D. 10. It is indispensably necessary to good government, and rendered essential by the English constitution, that the constituent branches of the legislature be independent of each other; that, therefore, the exercise of legislative power in several colonies, by a council appointed, during pleasure, by the crown, is unconstitutional, dangerous and destructive to the freedom of American legislation.

All and each of which the aforesaid deputies, in behalf of themselves, and their constituents, do claim, demand, and insist on, as their indubitable rights and liberties, which cannot be legally taken from them, altered or abridged by any power whatever, without their own consent, by their representatives in their several provincial legislature.

In the course of our inquiry, we find many infringements and violations of the foregoing rights, which, from an ardent desire, that harmony and mutual intercourse of affection and interest may be restored, we pass over for the present, and proceed to state such acts and measures as have been adopted since the last war, which demonstrate a system formed to enslave America.

Resolved, N.C.D. That the following acts of parliament are infringements and violations of the rights of the colonists; and that the repeal of them is essentially necessary, in order to restore harmony between Great Britain and the American colonies, viz.

The several acts of Geo. III. ch. 15, and ch. 34.-5 Geo. III. ch.25.-6 Geo. ch. 52.-7 Geo. III. ch. 41 and ch. 46.-8 Geo. III. ch. 22. which impose duties for the purpose of raising a revenue in America, extend the power of the admiralty courts beyond their ancient limits, deprive the American subject of trial by jury, authorize the judges certificate to indemnify the prosecutor from damages, that he might otherwise be liable to, requiring oppressive security from a claimant of ships and goods seized, before he shall be allowed to defend his property, and are subversive of American rights.

Also 12 Geo. III. ch. 24, intituled,3 “An act for the better securing his majesty’s dockyards, magazines, ships, ammunition, and stores,” which declares a new offence in America, and deprives the American subject of a constitutional trial by jury of the vicinage,4 by authorizing the trial of any person, charged with the committing any offence described in the said act, out of the realm, to be indicted and tried for the same in any shire or county within the realm.

Also the three acts passed in the last session of parliament, for stopping the port and blocking up the harbour of Boston, for altering the charter and government of Massachusetts-Bay, and that which is entitled, “An act for the better administration of justice, etc.”

Also the act passed in the same session for establishing the Roman Catholic religion, in the province of Quebec, abolishing the equitable system of English laws, and erecting a tyranny there, to the great danger (from so total a dissimilarity of religion, law and government) of the neighboring British colonies, by the assistance of whose blood and treasure the said country was conquered from France.

Also the act passed in the same session, for the better providing suitable quarters for officers and soldiers in his majesty’s service, in North-America.

Also, that the keeping a standing army in several of these colonies, in time of peace, without the consent of the legislature of that colony, in which such army is kept, is against law.

To these grievous acts and measures, Americans cannot submit, but in hopes their fellow subjects in Great Britain will, on a revision of them, restore us to that state, in which both countries found happiness and prosperity, we have for the present, only resolved to pursue the following peaceable measures: 1. To enter into a non-importation, non-consumption, and non-exportation agreement or association. 2. To prepare an address to the people of Great-Britain, and a memorial to the inhabitants of British America: and 3. To prepare a loyal address to his majesty, agreeable to resolutions already entered into. 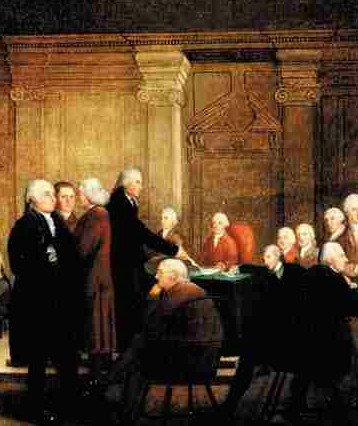