On June 7, 2002, with the attacks of September 11, 2001 still fresh in memory and with the nation at war, President George W. Bush (b. 1946) issued this Flag Day proclamation. His thoughts about the day and about the flag are usefully compared with those of his predecessors (see the proclamations by Wilson and FDR, as well as Reagan’s remarks).

What, according to Bush, is the meaning of the American flag today? Have the new circumstances facing the United States since 9/11 changed the meaning or purpose of Flag Day? How do you explain the spontaneous and widespread appearance, after 9/11, of American flags—“on cars and clothing, houses and hard hats”? What does that display tell us about the meaning of the flag? Does it continue to have the same meaning for us as time passes and 9/11 becomes a more distant memory? Are we at risk of taking for granted the flag and what it stands for? In what way might honoring Flag Day help reduce such a risk?

The American flag is a beacon of hope, a symbol of enduring freedom, and an emblem of unity. Many have given their lives in its defense, and countless men and women have worked to ensure that Old Glory continues to stand for the ideals of freedom, justice, and equal opportunity for all. Our flag symbolizes the purpose and resolve of our Nation, first expressed by our Founders who triumphed against great odds to establish this country.

Today, as we face the challenges of a new era, our flag reminds us that freedom will prevail over oppression and that good will overcome evil. Following the attacks of September 11, Americans embraced a renewed sense of the meaning and purpose of our flag. The unforgettable images of our Nation’s colors flying defiantly over the debris of the World Trade Center inspired our country with a healing hope, uniting our people in purpose and consoling those who had suffered great loss. At the Pentagon, an American flag was hung from the building’s damaged walls, expressing our collective resolve to rebuild and move forward. And earlier this year, during the Opening Ceremonies of the Winter Olympic Games in Salt Lake City, Americans, joined by peace-loving people from around the world, paid tribute to the tattered flag that had been recovered from the ruins of the World Trade Center.

As we reflect on what our flag represents, we recall the words of President Woodrow Wilson, who said just weeks before the onset of World War I: “My dream is that, as the years go on and the world knows more and more of America, it . . . will turn to America for those moral inspirations which lie at the basis of all freedom . . . that America will come into the full light of the day when all shall know that she puts human rights above all other rights, and that her flag is the flag, not only of America, but of humanity.”

The flag that inspired Francis Scott Key to write our National Anthem 188 years ago still energizes and inspires the American spirit. Since September 11, we have seen our Nation’s flag appear everywhere—on cars and clothing, houses and hard hats—showing our country’s commitment to always remember those who lost their lives and to remain unremitting in the pursuit of justice.

Today, in Afghanistan and around the world, brave men and women are serving under our flag, fighting to preserve freedom and win the war against terrorism. All Americans are profoundly grateful for their service and their sacrifice. We also recognize and commend the contributions of our veterans who have bravely defended our Nation’s founding principles throughout our history. The image of six marines raising the flag on the top of Mount Suribachi at Iwo Jima will always remind us that the struggle for liberty is a story of courage, sacrifice, and commitment to the unshakeable belief in freedom’s promise.

On Flag Day, we remember the struggles and successes for which our flag stands. And we look to the flag as an everlasting symbol of our commitment to a world of peace, a Nation of principle, and a people of unity.

To commemorate the adoption of our flag, the Congress, by joint resolution approved August 3, 1949, as amended (63 Stat. 492), designated June 14 of each year as “Flag Day” and requested that the President issue an annual proclamation calling for its observance and for the display of the Flag of the United States on all Federal Government buildings. The Congress also requested, by joint resolution approved June 9, 1966, as amended (80 Stat. 194), that the President annually issue a proclamation designating the week in which June 14 occurs as “National Flag Week” and calling upon all citizens of the United States to display the flag during that week.

Now, Therefore, I, George W. Bush, President of the United States of America, by virtue of the authority vested in me by the Constitution and laws of the United States, do hereby proclaim June 14, 2002, as Flag Day and the week beginning June 9, 2002, as National Flag Week. I direct the appropriate officials to display the flag on all Federal Government buildings during that week, and I urge all Americans to observe Flag Day and National Flag Week by flying the Stars and Stripes from their homes and other suitable places. I also call upon the people of the United States to observe with pride and all due ceremony those days from Flag Day through Independence Day, also set aside by the Congress (89 Stat. 211), as a time to honor America, to celebrate our heritage in public gatherings and activities, and to publicly recite the Pledge of Allegiance to the Flag of the United States of America. 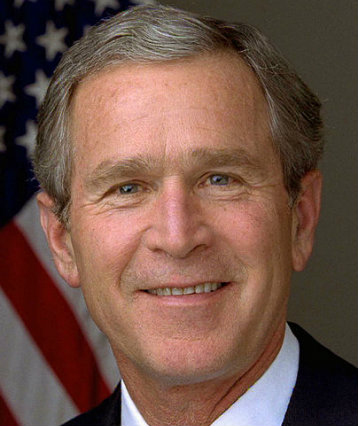