James Karales was born on July 15, 1930, in Canton, Ohio, to Greek immigrants. In 1955, after earning his degree in Fine Arts from Ohio University, he came to New York and worked as an assistant to the renowned photographer W. Eugene Smith. He became a staff photographer at Look magazine in 1960, and for the next 11 years traveled the world as a photojournalist.

In March 1965, Karales recorded the Selma-to-Montgomery March, in which scores of protesters walked the 54 miles to the Alabama state capitol building to protest against racial injustice—and, particularly, the death of Jimmie Lee Jackson, an African American protester who was killed by an Alabama state trooper during a protest in February. The first attempt at the march, on Sunday, March 7, ended when the protesters crossed the Edmund Pettus Bridge outside Selma and were confronted by Alabama state troopers. The troopers attempted to disband the protest, and in doing so left many marchers bloodied and injured, with 17 protesters requiring hospitalization.

After “Bloody Sunday,” as the incident came to be called, Martin Luther King Jr. and other civil rights leaders began to organize another march, to be held two days later, on Tuesday, March 9. King led about 2,500 supporters across the Pettus Bridge, where he held a short prayer session and turned the marchers around, in compliance with a federal restraining order that prohibited the march until hearings could be held. That evening, three white ministers who participated in the march were attacked, and one of them—James Reeb, who had traveled from Boston to participate—died two days later from his injuries.

On March 16, the federal judge lifted the restraining order and allowed the march to continue under the protection of the First Amendment. The march to Montgomery finally commenced on March 21, with about 3,000 protesters joining in for the first day’s journey; by the time the protest reached the Alabama capitol four days later, the crowd had swelled to roughly 25,000 people. At the capitol, King delivered a speech in which he encouraged the protesters that it would not be long before they would see justice: “I come to say to you this afternoon, however difficult the moment, however frustrating the hour, it will not be long, because ‘truth crushed to earth will rise again.’ . . . How long? Not long, because: ‘Mine eyes have seen the glory of the coming of the Lord.’”

Karales’s iconic picture captures a dramatic view of the marchers that emphasizes their historic undertaking. The four figures in front march in unison, leading a seemingly unending line of protesters who rally around the American flag to protest in favor of the Constitution’s guaranteed freedoms. The dark clouds above remind us of the difficult obstacles that stand in the protesters’ way and the courage required to continue. In addition, the photograph is framed so that only the essentials—the protesters, the flag, and the sky—are present, isolating them from the milieu of national guardsmen, reporters, and cameramen also present. As historian Taylor Branch, author of America in the King Years, notes, the photograph “may very well be the seminal image to come out of the civil rights marches in the South. . . . It is an amazing combination of movement and shadow. It looks like they are marching out of the Red Sea.”

After covering the Selma-to-Montgomery March, Karales continued his career in photojournalism, alternating between covering the Civil Rights Movement and the war in Vietnam for the next several years. He died in 2002 at the age of 71.

Looking carefully at the appearance of the marchers at various parts of the picture, describe the overall visual effect of the progression from right to left. What is the mood of the marchers? What feelings does the picture arouse in you? Is envy one of them? Can you imagine what it must have been like to have been in that march?

James Karales, Selma-to-Montgomery March for Voting Rights in 1965, 1965, photograph. Copyright © Estate of James Karales. Reprinted by permission of the estate. 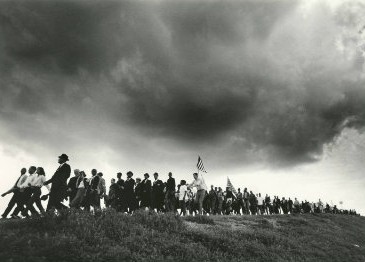