The Flag Goes By

Henry Holcomb Bennett (1863–1924), an Ohio-born author and poet, moved west after graduating from Kenyon College to work in the railroad business before returning to his hometown of Chillicothe as a journalist. By 1897, he left journalism to focus on more creative writing, including short stories and poems, often illustrating his own works (he was a landscape painter as well). His nonfiction work included essays about military life, Ohio history, and ornithology. Bennett’s most famous work remains this patriotic poem, first published in The Youth’s Companion on January 13, 1898. It was immediately included in several students’ readers around the turn of the century.

What is the mood of the poem? The first and last verses differ in only one line. What according to the poem happens to the bystanders to convert their experience from “A flash of color beneath the sky” to “loyal hearts are beating high”? Why does Bennett begin by commanding us to remove our hats as the flag passes by? What thoughts and feelings does the passing flag—both in the poem and in your lived experience—arouse in you?

Hats off!
Along the street there comes
A blare of bugles, a ruffle of drums,
A flash of color beneath the sky:
Hats off!
The flag is passing by!

Blue and crimson and white it shines,
Over the steel-tipped, ordered lines.
Hats off!
The colors before us fly;
But more than the flag is passing by.

Sea-fights and land-fights, grim and great,
Fought to make and to save the State:
Weary marches and sinking ships;
Cheers of victory on dying lips;

Sign of a nation, great and strong
To ward her people from foreign wrong:
Pride and glory and honor,—all
Live in the colors to stand or fall.

Hats off!
Along the street there comes
A blare of bugles, a ruffle of drums;
And loyal hearts are beating high:
Hats off!
The flag is passing by! 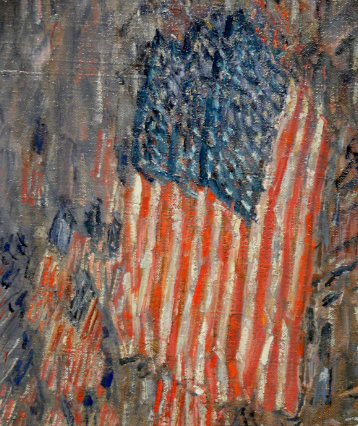