Zachary Gold (1918–53) was an American screenwriter and short story writer. Born in Brooklyn and educated at the University of Wisconsin, he wrote a considerable number of notable short stories, variously published in the Saturday Evening Post, Collier’s, and Reader’s Digest. This story, originally published by Collier’s in 1945, imagines the events leading to Abraham Lincoln’s delivery of the Gettysburg Address on November 19, 1863 through the viewpoint of a (fictional) black servant to David Wills (1831–1894), Lincoln’s host in Gettysburg. What is the meaning of the title? What question(s) are asked in the story, whether explicitly or implicitly, and how are they answered? How good a response is Lincoln’s speech to the loss of Marcus’ son, Jeff, in battle—and by extension, to the terrible carnage of the Civil War? What is the significance of the math problem Marcus discovers?

The old Negro meant to come up when the room was empty. He thought they must be gone by now but coming up the stairs he heard voices and he knew that they were still there. It was too late then. Mr. Wills1 was standing in the doorway of the room and he saw him.

The tall man, the tallest man Marcus had ever seen, was sitting at the desk writing, and he looked up when Marcus came in and smiled.

It didn’t seem right somehow to smile back, so Marcus did nothing, moving to a corner of the room, holding his broom and dustpan, waiting, standing quietly as a shadow. Once he wondered if he dared to say anything about Jeff, but he heard the pen scratch steadily on without a break. Still, someday he’d tell Jeff that he had thought about it.

He had Jeff’s letter in the inside pocket of his jacket and he felt for it. There was something even in the feel of the paper that brought the boy back real and shining and alive to his senses. Jeff never wrote much and it hardly mattered to Marcus that he couldn’t read the words; it was the letter itself in the stiff envelope that counted. It was getting it and knowing that Jeff was alive and well in war. That was the main thing.

He watched them go but he waited until the tall man descended the steps before he moved. There wasn’t much to clean. He swept the room, straightened the scarves on the furniture and emptied a small litter of scraps from the wastebasket. Through the windows of the room he could see movement on the roads that snaked out of town to the hills.

Marcus remembered then that he had to hurry.

Mr. Wills had told him that he might take the time off if he wanted to come. The whole town would be there and people had come in from miles away—from Philadelphia, some said—and it wasn’t something a man should miss. It was a big day and Marcus meant to be there.

Standing in the empty room, he took one final look around. Had he forgotten anything?

Sure enough, he had forgotten to clear off the desk. There was a half sheet of paper lying on the face of the desk. There were some numbers scribbled on it in a column. He could read numbers and he glanced down idly at the sheet:

And then because he was eager to be gone, he swept it from the desk and stuffed it in his pocket as he hurried out.

There was a hint of winter outdoors, although there was no snow yet. Hurrying through the streets of the town, Marcus wondered whether he had time to stop off to get Jeff’s letter read. Old Glidden, the Negro schoolteacher, was always glad to read Jeff’s letters to him, and it wouldn’t take long. Besides, it was a long way out, and a stop would be a warm break in the cold walk.

Old Glidden was brewing coffee when he came in. He was old—older than Marcus—older than most men get to be, but he was sharp and quick and he looked up as Marcus came in.

“Got a letter from Jeff?” he said.

Old Glidden poured two cups of coffee, and then Marcus took the letter out of his pocket. He passed it to Old Glidden, and while he was opening the letter, Marcus bent eagerly to the coffee and sipped it in, feeling the welcome heat go through him.

“This letter isn’t from Jeff.”

“Not from Jeff. Who’d be writing to me?”

For a moment Old Glidden didn’t answer and then he said quickly and baldly, “The letter says Jeff is dead.”

Marcus felt the cup shake in his hand and he sat there looking at Old Glidden, suddenly smelling the warm, pungent vapor of the coffee all around him, sharp as the odor of early clover.

“This is from the captain,” Old Glidden was saying, softly now. “He says he wanted to write to tell you how Jeff died. He says Jeff was one of the best men he ever knew and he was a good and brave soldier. He says—”

He was reaching for the letter, and Old Glidden gave it to him, saying nothing.

He held it in his hands for a while and then, as he always did after Old Glidden finished with one of the letters, he put it carefully back into his pocket.

Old Glidden said anxiously: “Where are you going, Marcus?”

Marcus came back for his coat. Old Glidden twisted the red wool scarf around his neck. He went to the door with Marcus.

“You all right, Marcus?”

And then at the door, looking out at the bare hills sharp as iron humps against the November sky, Marcus said, “Why Jeff?”

It was because he heard the sound of a crowd that he knew he was there. He was suddenly aware of the people around him and he looked up. There were more than he had expected and he knew that he would never find Mr. Wills in a crowd like this. Well, it didn’t matter. Jeff was dead: the son who was like the morning, full of hope and strength and the promise of laughter.

Marcus reached once more for the letter and drew it out. There was a sheet of paper caught under the flap of the envelope. He stared at it and then remembered that it was the sheet of paper he had swept off the desk earlier that morning.

He opened it now, holding it against the envelope, puzzling over the sum:

He repeated the number to himself but the meaning, whatever it was, escaped him. He needed Jeff. Jeff was always the one to tell him things, but Jeff was gone now, and who was there to answer the questions that beat in waves of bitter grief and pain against the breached fortress of his heart?

Why was he dead? Why Jeff? What was there worth his young body and the curiosity of his mind and the strong sound of his voice?

He remembered the man who had written the sum and he looked toward the platform at one end of the field where the tall man, the tallest man Marcus had ever seen, was rising now, bareheaded in the chill November air.

Marcus leaned forward then, filled with a sudden sense of urgency, listening angrily, wanting an answer, listening for Jeff, and for all the young everywhere who give their bodies and their hopes and their lives upon bare and death-strangled fields.

And there in the low hills outside Gettysburg town that lay quiet now under the cold autumn sun, the tall man who had scribbled the odd sum on a scrap of paper rose to speak:

“Four score and seven years ago our fathers brought forth on this continent, a new nation, conceived in Liberty, and dedicated to the proposition that all men are created equal.

But, in a larger sense, we can not dedicate—we can not consecrate—we can not hallow—this ground. The brave men, living and dead, who struggled here, have consecrated it, far above our poor power to add or detract. The world will little note, nor long remember what we say here, but it can never forget what they did here. It is for us the living, rather, to be dedicated here to the unfinished work which they who fought here have thus far so nobly advanced. It is rather for us to be here dedicated to the great task remaining before us—that from these honored dead we take increased devotion to that cause for which they gave the last full measure of devotion—that we here highly resolve that these dead shall not have died in vain—that this nation, under God, shall have a new birth of freedom—and that government of the people, by the people, for the people, shall not perish from the earth.”

1 David Wills (1831–94), Lincoln’s host while in Gettysburg and the principal figure in the establishment of the National Cemetery at Gettysburg, Pennsylvania. Return to text.
Return to The Meaning of Abraham Lincoln’s Birthday. 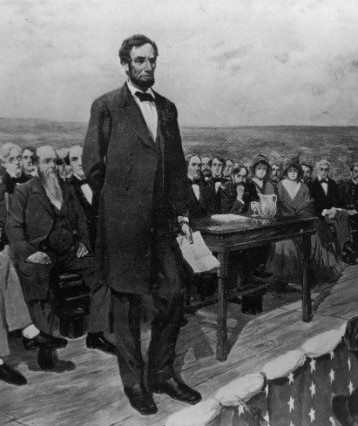